A STAINED glass window depicting Scotland and Hearts footballing legend Bobby Walker is to be auctioned later this month.

The window, which is similar to glass panels of sporting heroes found at The Café Royal in Edinburgh, is expected to fetch between £800 and 1,200.

Walker joined Hearts from Dalry Primrose in 1896, making his debut in a “trial” match vs Sunderland. 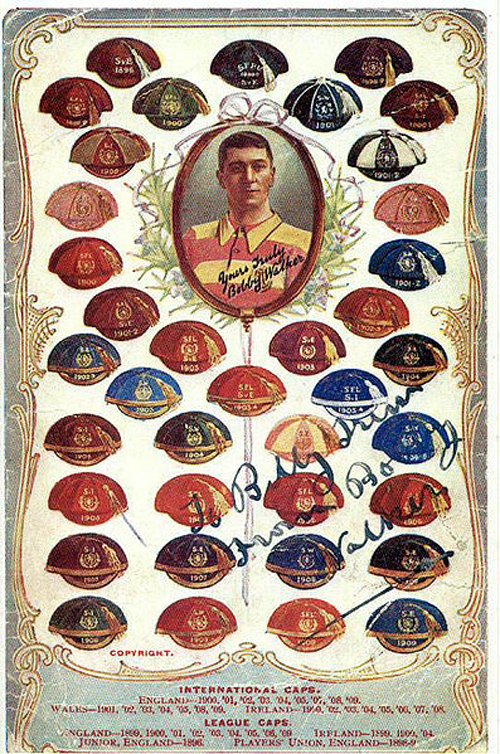 Walker was capped 29 times for Scotland

He was the first Hearts player to score over 100 league goals, and he scored Hearts’ 1000th league goal.

Other notable achievements are his 33 goals against Hibernian, which is the record tally in the Edinburgh derby. He scored two hat-tricks against Hearts’ Edinburgh rivals, the first at the age of 19 years and 9 months in a 5-1 victory at Easter Road on 28 October 1898. He repeated the feat on 18 September 1905 again at Easter Road in a 3-0 win.

With the score poised at 3-3 The Scotsman reported “It, however, proved staunch, and the Edinburgh team soon showed that they were not going to relinquish the grasp of the cup which their play entitled them to, and Walker once more proved himself the grandest forward on the field. Taking the ball some thirty yards right through the opposition, he shot straight and true.”

After this match he was called “The Best Player in Europe” and his style of football, involving brilliant footwork and sublime passing was known as “Walkerism”. He also played in Hearts Scottish Cup win of 1906.

In his international career he was capped 29 times for Scotland, 11 of which were against England.

The owner who wishes to remain anonymous said “I was given it by my late father and I am not sure how it came into the family’s ownership, but since then it has been in my loft and I was having a bit of a tidy up and thought why not sell it and let someone else enjoy it.”

Walker became a Hearts Director in 1920. He died at the early age of 51 in August 1930. Huge crowds lined the funeral route and thousands stood round his graveside.

His obituary in The Scotsman stated the following: “The Hearts never had a more brilliant forward than Walker. He was amazingly clever in manipulating the ball, and, it was on skill alone that he relied, for he was never favoured with physique. With the ball at his feet he could turn on his course elusively, and in such little space, that he could often put a whole defence out of position with his deft movement.”

The Football Encyclopaedia from 1934, edited by Frank Johnston, referred to him simply as “Bobby Walker, the greatest natural footballer who ever played.”