A LIFESAVER has defended the Stayin’ Alive ad campaign, after complaints were made about Vinnie Jones’ CPR methods.

Paul Pinkney insists that he and his friends are living proof that the advice given in the TV advert works.

The restaurant owner and his friends were able to save their friend’s life after he collapsed on a golf course in February. 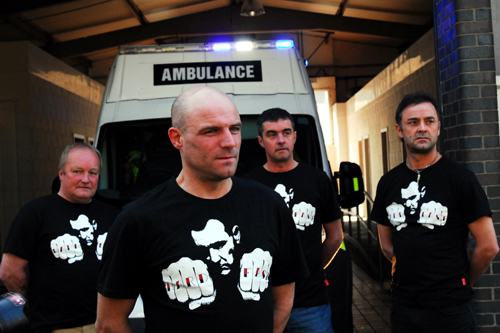 Mr Pinkney said that he copied the movements demonstrated by the former footballer on the British Heart Foundation ads on television.

Alan Linton collapsed and stopped breathing while playing golf near Colinsburgh, Fife, and health experts said that chest compressions carried out by his pals saved his life.

Yesterday, the Advertising Standards Agency rejected complaints by viewers that Jones is doing CPR incorrectly in the ad.

The ad shows the actor displaying hands-only CPR and instructing: “no kissing.”

He instructs viewers to concentrate on pressing hard and fast on the chest to the tune of Bee Gee’s Stayin’ Alive and says to forget the kiss of life.

Paul Pinkney and friends Brian Henderson and Michael Rennie were able to save Alan’s life with the help of another golfer Peter Meldrum.

Speaking about the complaints of the ad, Paul said: “I can’t believe people have been complaining about the advert.”

“It obviously works. The only thing we did was follow the advert to a T, and Alan is alive because of it.

“We phoned 999, did chest compressions and kept his airways open.”

In a recording of the 999 call from Charleston Golf Course, near Colinsburgh, Paul can be heard shouting: “I’m doing the staying alive thing.” 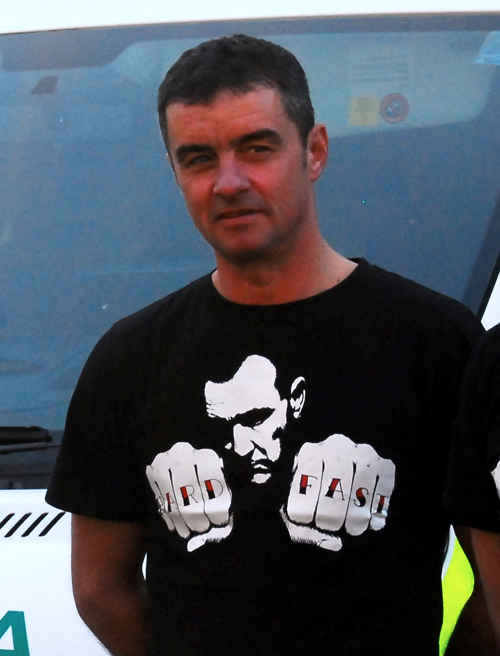 Paul used the advice in the ad to give Alan CPR

Alan had gone out golfing as part of a four-ball with his three friends when he suddenly took ill on the sixth green.

Speaking last month, Alan said: “I was walking back to my golf bag and I was feeling a bit dizzy and I got to my bag and went down onto my hunkers and I saw bubbles.

But when Alan failed to get up, the group then leapt into action, with Brian phoning an ambulance and Paul starting CPR using advice from the advert.

Their brave actions paid off and Alan was airlifted to Ninewells hospital in Dundee.

Last month, Alan and his friends met and thanked the paramedics and the 999 call handler who also helped save him from an early grave.

Alan, who lives in Ladybank with wife Jacqui and children Ellie-Jay, 10, and Sam, six, spent three weeks recovering in hospital before returning to his Fife home.

Alan McIntyre was one of the paramedics who raced to the scene. He said: “We know from evidence that the quicker you do something the better the outcome.

“Vinnie Jones on one prime time advert got the message across to these guys about the benefit of quick actions.

“The sterling work that these guys did made our jobs all the more worthwhile.”