A SCOTS bus company has caved into pressure from city mums and dropped its controversial pram ban.

Lothian buses in Edinburgh had outlawed parents bringing non folding buggies on to its buses, leading to a long-running row with angry parents.

But now the bus company will allow all types of prams and buggies onboard, as long as parents vacate the designated wheelchair space if required. 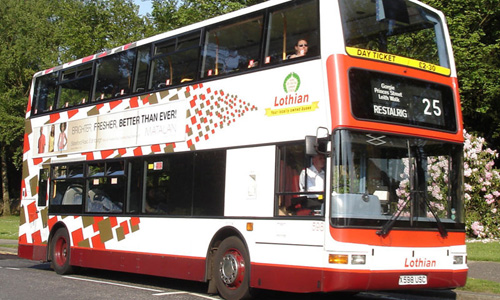 Lothian buses will now allow all types of prams and buggies onboard.

The “pram ban” caused controversy last month after a Scots mum had a ten minute stand off with a bus driver who stopped her bringing her newborn son onto his bus.

In April last year, Kayleigh Martin told how she struggled to travel to hospital for daily blood tests because she was unable to fold the pram and carry her child at the same time.

Campaign group Babies on Buses welcomed the move to life the “pram ban”, but said it should have happened earlier.

The group’s Caroline Burgess said: “They should have done this along time ago. A lot of mothers have been left isolated in the meantime.

“We just hope this will work. Certainly out members have said they will leave a bus if a wheelchair space is required.”

Lothian buses will now allow all types of buggies on board and will introduce onward travel tickets so any passengers with buggies will be able to complete their journey on another bus if they have to make way for a wheelchair user.

Lothian Buses, managing director Ian Craig, said: “Fifty two percent of all passenger journeys with Lothian Buses are on vehicles with wheelchair and buggy spaces, marking a ‘tipping point’ at which we feel it would be appropriate to make this change.

“We are sensitive to customer needs and we will make as clear as possible to them the changes we’re making and why we’re making them over the coming weeks. These are good, responsible changes that we hope everyone will recognise.”

Parents are being asked by Lothian buses to consider the model of buggy they plan to travel with as they will still sometimes need to vacate the wheelchair space.

The firm said its restrictions on non-folding buggies were required to comply with disabilities legislation.

The new rules have been in development since 2009 and come into force on April 30 following independent research.