A SCOTTISH taxi driver picked up an unexpected fare when he dramatically helped deliver a baby boy during a routine call out.

Cabbie Alan Simpson was called to an Edinburgh home just in time to take on the role of midwife and see the tiny tot take his first breath.

The 44-year-old was called to make a journey from Broomhouse to the Edinburgh Royal Infirmary but when he arrived at Adrien Lanvai and partner Zoltan Dobos home he was ushered in by a panic stricken father. 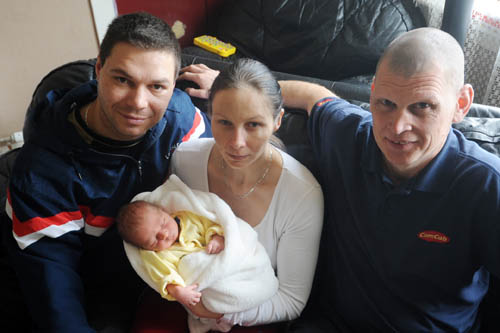 Following telephone instructions from the emergency services operator, Alan relayed advice to help the mum and partner through the labour.

He then calmly wrapped the newborn in a blanket before going back to work.

The taxi driver from Musselburgh managed to keep calm under pressure and has been praised by ambulance service for doing a “fantastic job”.

Mr Simpson said: “It was just a normal start to the day and I got a job to the Royal Infirmary. I pulled up and a man was at the window, you could see he was frantic and was saying ‘you must help’. I went up the stairs but I wasn’t too sure what was going on.

“I went in and there was the woman. I’d never been in that situation before but I just got on the phone to the ambulance.

“The baby came out straight away. Everyone was in panic mode and there was blood everywhere, but they told me what to do. I think the baby boy was the most relaxed one in the room – he just let out a little whimper.

“The ambulance turned up quite quickly but it seemed like an age. I’ve been a cabbie for 15 years but I’ve never had a job like that.”

After handing the scene over to paramedics, Alan went back to work and called back later in the day to check on the mother and child.

He added: “It might have made a difference to have a calming voice, although I wasn’t that calm. When I left the dad was standing proudly with the wee boy in his arms. It felt quite good, seeing that baby born was quite amazing.”

New mum Adrien, who is originally from Hungary, moved to Edinburgh three years ago.

She said: “It was all such a rush, but we all want to say thank you to Alan. If he was not here we don’t know what would have happened.”

Adrien’s friend, Bea’ta Sipos was also present at the birth. She said: “Alan was so calm, more than any of us. I think if he wasn’t here something bad could have happened. It can be hard when you’re not from this country to get instructions over the phone.”

Following the tot’s dramatic birth on Tuesday morning, Adrien and Anthony were taken to the Royal Infirmary but released later that day.

Adrien, now a mother of four, is back at home with the healthy new addition to her family.

She added: “The family is very, very happy, we are excited.”

A Scottish Ambulance Service spokesman said: “The taxi driver and the mum’s partner both did a fantastic job.”