DR WHO babe Karen Gillan was so inundated with email alerts after joining Twitter yesterday that her phone crashed.

The 24-year-old actress received 50,000 of the email alerts after finally deciding to join the social networking site yesterday.

But the flame-haired star forgot to turn off email alerts, and just hours later the email deluge caused her smartphone to crash as she filmed the hit BBC show in New York. 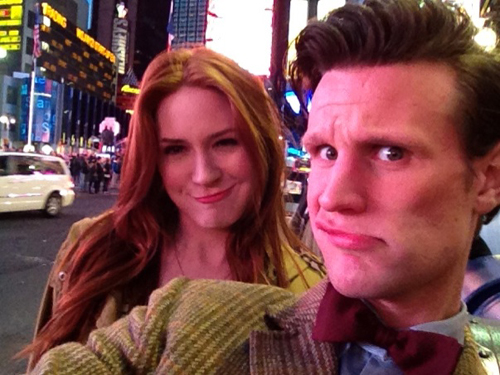 Her Dr. Who co-star Arthur Darvill was quick to mock the actress on his own Twitter page and said: “So @KarenGillan2 has NOT turned off her email notifications and her battery has died. Cue 50000 emails. Today just got so much better.”

Karen kept her debut on Twitter short and sweet and said: “Hello Twitter…..nice to meet you.

She later tweeted: “Thanks to everyone following me!!! Argh this is really exciting. Oh, and by the way…WE ARE IN NEW YORK!!!!

A fast learner, the beauty even managed to Tweet a picture of herself and co-star Matt Smith posing inNew York’s busyTimes Square.

But theInvernessstar obviously realised just how popular she was becoming and complained that no-one warned her to turn her email alerts off.

She angrily tweeted her friend Arthur: “Someone could have told me to turn off my email notifications when I joined twitter today @RattyBurvil. Plus side? That many cyber friends.”

Fans of Gillan were quick to support her though and offered their sympathies for her phone melt-down.

Another said: “Yeah…that was partially ’cause of me I guess…I mentioned her. lol. #ILoveKaren”

The crew are currently on location filming the last scenes of Dr Who inNew York.

Darville, who plays Rory Williams and Gillan, who plays Amy Pond, were seen in Central Park yesterday running through their lines and sharing a kiss for what may be their last intimate moment as Doctor Who’s companions.

Characters Amy and Rory are leaving the sci-fi series in what show boss Stephen Moffat has called a “heartbreaking” storyline.

Last week Karen was spotted sobbing on the show’sCardiffset as she filmed her final exit scenes.

She will be replaced by actress Jenna-Louise Coleman.