CRATERS made by asteroid impacts may be the best place to look for signs of life on other planets, a study suggests.

Tiny organisms have been discovered thriving deep underneath a site in the US where an asteroid crashed some 35 million years ago.

Scientists believe that the organisms are evidence that such craters provide refuge for microbes, sheltering them from the effects of the changing seasons and events such as global warming or ice ages. 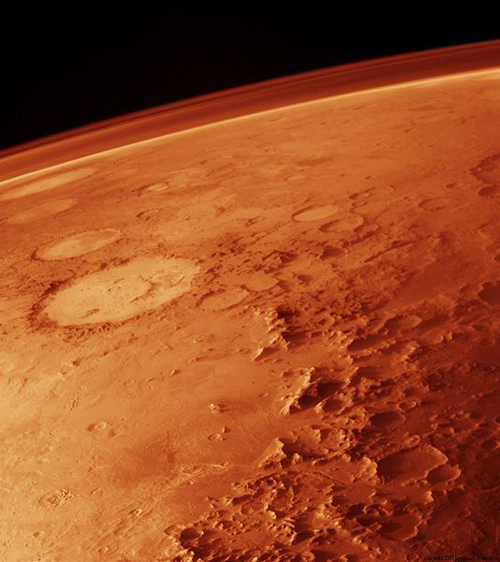 Life on Mars? Study could hold the answers

The study suggests that crater sites on Mars may also be hiding life, and that drilling beneath them could lead to evidence of similar life forms.

Researchers from the University of Edinburgh drilled almost 2km below one of the largest asteroid impact craters on Earth, in Chesapeake, US.

Samples from below ground showed that microbes are unevenly spread throughout the rock, suggesting that the environment is continuing to settle 35 million years after impact.

Scientists say that heat from the impact of an asteroid collision would kill everything at the surface, but fractures to rocks deep below would enable water and nutrients to flow in and support life. Some organisms grow by absorbing elements such as iron from rock.

Professor Charles Cockell, of the University of Edinburgh’s School of Physics and Astronomy, said: “The deeply fractured areas around impact craters can provide a safe haven in which microbes can flourish for long periods of time. Our findings suggest that the subsurface of craters on Mars might be a promising place to search for evidence of life.”