RUGBY fans in Edinburgh were today offered the opportunity to share in the excitement of the eighth leg of the HSBC Sevens World Series as the coveted Series trophy made a stopover in the city.

With anticipation building ahead of the Emirates Airline Glasgow Sevens on 5th and 6th May, the trophy visited the HSBC branch on Princes Street, where fans were able to take photos and catch a glimpse of the ultimate prize in Rugby Sevens.

Scotland legend Scott Hastings was also on hand for an exclusive Q & A session and the chance of an autograph, before the Series trophy continued it’s journey to Glasgow ahead of next month’s event at Scotstoun Stadium. 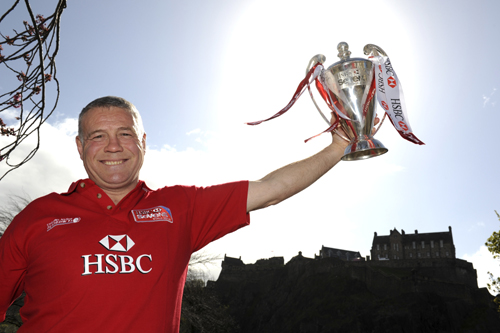 Speaking at today’s event, Hastings commented: “As a huge fan of Sevens rugby, it’s a real honour to take the trophy round Edinburgh and Glasgow ahead of the start of the Glasgow Sevens, the eighth round the HSBC Sevens World Series. It’s been great meeting all the fans, and I have been surprised by how many people have come out to meet us today!

“Glasgow is the new home of the Scotland leg of the series and to have the trophy that all the teams and players have been competing for all season here in advance; touring the country is a real treat. Having been to Dubai, Hong Kong, Las Vegas and Tokyo already this season, and with 15,000 tickets already sold, Glasgow is shaping up to be a fantastic new venue that the players and fans are looking forward to.”

Stephen Horton, retail branch manager for HSBC in Edinburgh said: “We were delighted to welcome the coveted Series Trophy to the Edinburgh branch today as excitement builds in the lead up to the Scottish leg of the HSBC Sevens World Series.  As today’s event marked a first for the branch, it was great to see so many customers and fans turn out to have their picture taken with the Trophy and local rugby legend Scott Hastings.”

The HSBC Sevens World Series is the pinnacle of international sevens rugby and a globally recognised sporting event featuring nine tournaments around the world. The Scottish leg of the Series has a new home this year at Scotstoun stadium in Glasgow and is the penultimate tournament of the Series.

The Trophy Tour has already stopped in Aberdeen and Inverness and will travel to Scotstoun Stadium in Glasgow on Tuesday 17th April, before finishing the tour at the HSBC branch in Buchanan Street, all ahead of the penultimate leg of the HSBC Sevens World Series, which takes place in city for the first time in 2012.

For more information on the HSBC Sevens World Series visit www.irbsevens.com or follow us on Facebook at facebook.com/irbsevens.