A ROGUE nurse who poisoned her best friend’s baby out of jealousy was today struck off.

But Veronica Duncan, 46, was banned from nursing for another offence – falsely claiming almost £9,000 in housing benefit last year.

The mother of the child she almost killed with insulin in 2007 was at the Nursing and Midwifery Council (NMC) hearing today. 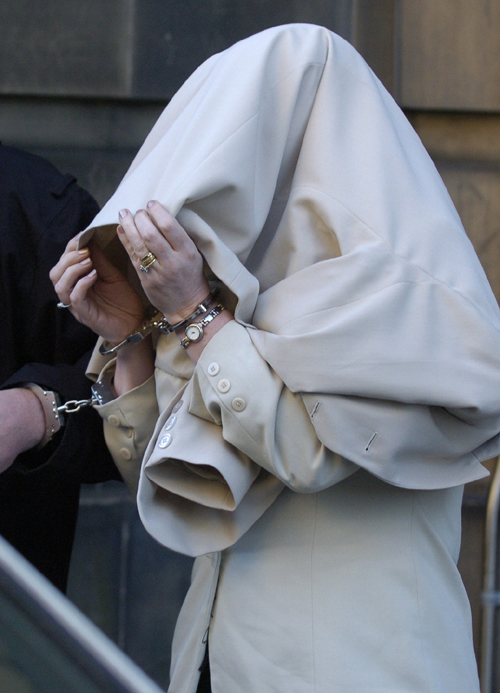 The woman, who cannot be named for legal reasons, said afterwards: “I am very happy. The NMC made the right decision today and I am delighted.”

She said of Duncan, who did not attend the hearing: “The last time I saw her was through a pane of glass at the High Court. I can’t believe she hasn’t shown again.

“I don’t even know what I would say if I saw her today.”

Today’s disciplinary panel was told that Duncan sent a letter explaining that she would not be able to attend because she is currently on holiday.

NMC solicitor Barry Dooley said that Duncan had been involved in a “lengthy period of serious dishonesty” where she was falsely claiming benefits which “she was not entitled to.”

He said: “The NMC became aware that she was convicted of housing benefit fraud. She pleaded guilty to her offence and appeared at the Edinburgh Sheriff Court. She was sentenced to 100 hours of community service for her crime.

“The registrant was reported to the department of work and pensions in connection with housing benefit fraud. She had been awarded payments for council tax and housing benefit when she was in fact working.

“She was receiving working tax credits because she was working at the time.”

The chairman of the committee Mr Andrew Popplewell said: “When she gained employment she said she had informed the housing authorities that her low income would still entitle her to some benefits but in fact they claim that they did not receive notification of her change of circumstances.”

The NMC found that her “fitness to practice” is impaired by reason of her conviction.

Reading the decision, Mr Popplewell said: “The panel have decided that a striking off order would be appropriate with regard to all of the evidence heard today. Careful regard was paid to the guidance published by the NMC and in view of the seriousness of her actions, a caution would not be inappropriate.

“Her behaviour demonstrated a serious departure from the relevant standard of the code. You must be open and honest and act with integrity. You must adhere to the law of the country in which you practise.

“The panel have decided that the only appropriate action would be to strike her off.”

Duncan was also handed an 18-month interim order for the “protection of the public.”

Duncan was originally suspended from nursing in 2009 after injecting a four-month-old tot with dangerous levels of insulin.

“This charge cannot be taken purely in isolation. The incident which arose in 2007 was an extremely serious one.

“Nurses have a privileged position in society and the seriousness of her dishonesty is great.

“The public need to be able to maintain confidence in the profession.

“The registrant deals with very vulnerable members of society. This registrant has not demonstrated honesty or integrity in any way whatsoever and these two characteristics are fundamental in a registered nurse.”

In 2007, Mrs Duncan, who had previously lost her one-year-old daughter, revealed to police that she was so “jealous and envious” of her friend’s healthy baby that she injected the tot’s stomach with the diabetes drug.

The nurse had a murder charge dropped and pleaded guilty to serious assault after maliciously injecting the baby with dangerous levels of the drug in 2007.

At the High Court in Edinburgh in October 2007, the court heard that Duncan attacked the baby after being left alone with her friend’s 4-month-old girl.

Duncan, who worked at the Edinburgh Royal Infirmary at the time, offered to dress the tot while the mum, also a nurse, got changed.

The grieving nurse then took the opportunity to repeatedly inject the baby in the stomach with insulin which she had carried in her bag on purpose.

Later that day, the mum noticed that her baby was not waking up for a feed and she was rushed to Borders General Hospital.

Doctors immediately thought she had a virus and battled to save the girl’s life.

Meanwhile,Duncan sat in the waiting room of the hospital and failed to tell anyone what she had done.

After a search of Duncan’s house, she finally admitted to police that she intentionally overdosed the baby and said that she was overwhelmed with jealously and envy at her friend’s healthy child, having lost her own baby just months previously.

Andrew Murphy, defending, said the case was set against a “weird and tragic” background.

He told the court that psychiatrists believed that at the time of the attack, Duncan was suffering from a mental disorder which fell short of mental illness.

He said: “It was reckless and irrational and committed when this lady was in a state of mental disorder.

“She is abjectly apologetic to the family for the concerns and pains she has caused them and the sense of betrayal they may feel.

“All she can say is she wasn’t herself at the time.

“She couldn’t believe what had happened and this condition can create a sense of trance or detachment in the individual.”

Duncan’s daughter Anna died at the family home in Cardrona in May 2006 from an infection after catching chickenpox.

She had been given the controversial MMR jab a fortnight previously.

As well as her year-long suspension from the NMC at the time, Duncan was given three years probation with strict conditions, underwent psychiatric treatment — and was banned from unsupervised contact with children under seven.

The mum of the tot added today: “There are hundreds of people who have lost a child but you wouldn’t dream of hurting another child. I understand that it was horrendous for her, the loss of a child is incomprehensible and I was very close to that.

Speaking about her baby, who is now a happy, healthy five-year-old, she added: “She was unstable for 48 hours – they were the worst hours of my life. She was three years old when she was given the all clear. She is a lovely wee girl now, so happy.

“In the future, we will have to tell her what happened, but where do you even begin? How do you tell a child, ‘she wanted to take your life, she nearly killed you.’?