A range of Japanese importers, chefs, buyers and media, including the executive chef at world-renowned restaurant Nobu Tokyo, attended ‘Scotland – the Land of Food and Drink’ at the Imperial Hotel in Tokyo to try Scottish food with a Japanese twist.

Food and drink exports to Japan are currently worth £91 million . In 2011, Scotch whisky exports increased 25% to £74.5 million while imports of food such as smoked salmon increased 24% to £16.2 million. 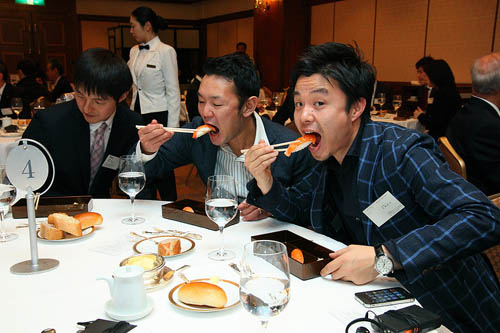 Continuing his mission in Japan to promote Scotland and Scottish produce, Cabinet Secretary for Finance and Sustainable Growth John Swinney said: “Scotland, the land of food and drink, has long excelled in the premium food and drink category with products that draw on provenance and authenticity for their quality.

“The rapid growth in imports shows clearly that Japanese consumers are demanding the best from their shops, restaurants and hotels: high quality Scotch whisky, Scottish salmon, seafood and bottled water. Many Scottish products carry health benefits and our rigorous safety standards are a seal of quality on all Scottish food and drink products.

“Scotland achieved record food and drink exports in 2011, reflecting a strong trend in Asia, and we have recently launched a food and drink strategy for Asia to build new relationships and provide a platform for Scottish companies to exploit new opportunities. This showcase in the heart of Tokyo is just the type of event to put Scottish food on Japanese plates.”

Kazuhiro Yokoyama, executive chef at world-renowned restaurant Nobu Tokyo, who was among the guests today said: “I have been using Scottish salmon for some time now and I think it is a delicious product with a very clean taste making it very easy to use in our dishes. For example, we regularly use Scottish salmon in our own “Nobu Style Sashimi” and we also use Scottish lobster in a stone-grilled dish that is very popular with our guests. There is so much potential for Scottish produce in Japanese food as it has such a clean taste. The natural flavour of Scottish produce is so good that there is no need to add additional ingredients to make it taste good as it really shines on its own in simple cooking styles like Japanese.”

Anne MacColl chief executive, Scottish Development International, said: “The Asian market offers significant potential for Scottish food and drink companies and it is a very good fit for Scotland’s strategic focus on premium products, health and provenance. With high rates of GDP growth in Asia, rising income levels, increased urbanisation and more sophisticated tastes, there is a very real opportunity for Scotland to build a profitable export business there.

“Our International Food and Drink Strategy for Asia, developed in consultation with key stakeholder organisations including the Scottish Salmon Producers’ Organisation, will ensure that we fully exploit these opportunities. Focusing on the areas where Scotland already has a global competitive advantage, such as whisky, seafood and red meat, the strategy focuses on promoting Scotland in Asia as the Land of Food and Drink.

“We know that international trade and investment is key to Scotland’s long-term economic recovery and we are committed to ensuring that food and drink companies in Asia see Scotland as the ideal partner of choice.”