MINISTER for Commonwealth Games and Sport, Shona Robison, today heard the inspirational stories of some of the winners of a new bursary to encourage healthy, active living in Scotland.

The “Go for It Scotland!” bursary was launched earlier this year by Quality Meat Scotland, working with sportscotland. Individuals, groups and clubs were invited to apply for the twenty £500 bursaries which will now be awarded annually in the run up to Glasgow 2014.

The bursaries have been won by applicants from throughout Scotland taking part in activities ranging from netball and hockey to baton twirling and synchronised swimming and further award winners will be announced in the coming weeks. 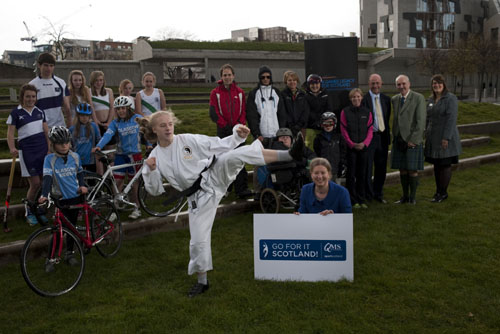 Some of the central Scotland winners of the first bursary pictured with Shona Robison, Minister for Commonwealth Games and Sport

Almost a thousand people are set to benefit from the awards distributed in year one of the bursary and the successful applicants from central Scotland who met the Minister today included 14 year old karate enthusiast Rebecca Stewart from Drumchapel, volunteers and skiers from Disability Snowsport Scotland who train at the Midlothian Snowsports Centre, members of the junior Edinburgh-based Inverleith Hockey Club, youngsters from the Glasgow Riderz cycling club and junior members of the Dunbar Running Club.

“This bursary is a great way to support people of all ages and abilities and will help them to pay for essentials. I am delighted to meet some of the successful recipients and wish them all the very best of luck in their chosen field.”

Anyone can apply for a “Go for It Scotland!” bursary, provided they live and train in Scotland and their sport or healthy activity increases their heart rate. The bursary can be used to fund equipment, specialist clothing, travel, training, nutrition, coaching or to set up or develop a new or existing group or club.

‘Uel Morton, QMS Chief Executive, said: “This is the first year of the bursary programme and we have had a really fantastic response. We received over two hundred applications and, as they were all of a really high standard, it made the final selection a tough job for the judging panel.

“Applications reflected a wide range of interests, from synchronised swimming to modern pentathlon, and we are delighted the twenty successful bursaries will benefit almost a thousand people, either as individuals or members of groups or clubs from as far afield as Orkney in the north to Ayrshire in the south.”

QMS already undertakes a range of activities to encourage awareness of the importance of good nutrition and a healthy diet and lifestyle and the bursary programme enhances the work already being done.

Stewart Harris, Chief Executive of sportscotland and a member of the judging panel, said: “As the national agency for sport, sportscotland was delighted to enter into this partnership with Quality Meat Scotland to support the ‘Go for It Scotland!’ bursary programme.

“We are passionate about encouraging people to become more active and the applications certainly reflected the enthusiasm and commitment people have for sport in this country.

Meeting some of the winners today who represent such a diverse range of sporting activities was really inspiring.”

sportscotland works with partners like Quality Meat Scotland, to develop and support a world class sporting system at all levels – investing in and joining up the people, places, partnerships and planning that makes sport happen.