A WITTY Scots chef today emerged as the Twitter user who sparked a worldwide anti-bigotry campaign.

Right-wing politician Tommy Robinson complained that the Twitter homepage had an image of the Taj Mahal mausoleum, which he wrongly described as a “mosque”.

Mr Robinson, the leader of the English Defence League (EDL), from Luton, Beds, then used the Twitter hashtag “#creepingsharia”. 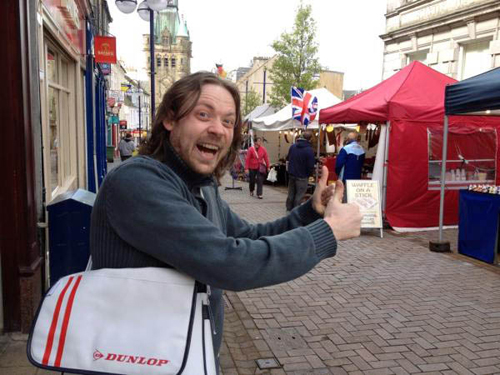 Richard Coughlan decided to fight back via twitter  Photo:Bronwen Phoenix

Top comedian Dara O’Briain was among those to join in the fun, sarcastically tweeting: “The man in the shop said I can’t return these underpants #creepingsharia.”

Richard said: “I know this means little in the grand scheme of things, but I do feel proud that my silly wee prank suddenly became a worldwide talking point.

“My goal was to make Tommy Robinson feel like a t**t and I think I definitely did that so I feel very vindicated.”

Mr Robinson, whose real name is Stephen Yaxley-Lennon, tweeted on Sunday: “welcome to twitter homepage has a picture of a mosque. What a joke #creepingsharia.

Richard explained: “I saw Tommy Robinson’s tweet that a mosque on the homepage of Twitter was ‘creeping sharia’ and thought I could have some fun.

“I encouraged my YouTube subscribers to post other sarcastic examples of ‘creeping sharia’ for mine and their amusement, and to annoy Tommy.

“Within a few hours it was the number one trending topic on Twitter in the UK and then worldwide.

“And then it got so big that comedians such as Dara O’Briain and Mitch Benn were even joining in.”

Hilarious tweets from twitter users included one from Robbie Gibbo, who wrote: “My nan goes to Mecca bingo. Coincidence? #creepingsharia” and Georgina Voss, who tweeted: “Not allowed alcohol with my antibiotics #creepingsharia.”

User Matty Lacey Davidson joined in, writing: “You have to take your shoes off before getting on a bouncy castle #creepingsharia”.

However, Mr Robinson, tweeted that he had gained 500 new followers following the twitter row.

He courted controversy earlier this year after appearing to support Norwegian mass killer Anders Breivik’, who is currently on trial in Oslo for the murders of 77 people.

In a recent interview with the Norwegian Dagbladet newspaper, Mr Robinson is alleged to have praised the “truth” of Breivik’s blogs, adding they are “full of facts”.