FIVE Scottish protesters arrived at Waverley station today after being deported from Israel and staging a four-day hunger strike.

The pro-Palestine campaigners had been in Tel Aviv on a humanitarian mission to the West Bank to help build a school for the blind.

The group, who flew into Israel on Sunday, had been trying to reach Bethlehem but were held up at passport control by Israeli authorities, handcuffed and taken to Givon Prison’s immigration detention centre. 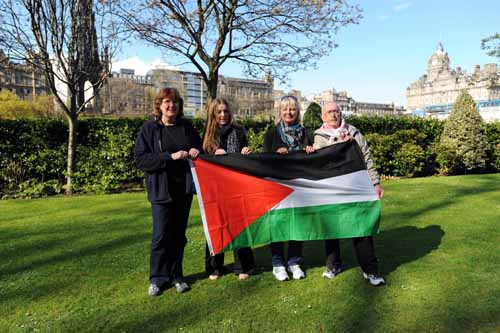 The protesters went on hunger strike in support of the 3500 Palestinian political prisoners.

After four days behind bars the five Scottish activists and four other Brits were deported and put on a flight back to the UK.

The campaigners arrived in Edinburgh on the 15.39 train from Manchester.

They were met with cheers and applause as they stepped off the train. 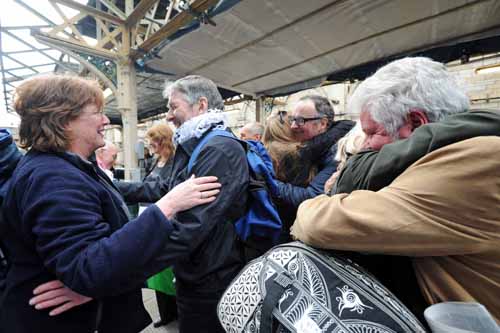 Friends of the group greeted them with Palestinian flags and showered them with hugs and kisses.

One of the protesters, Jim Henry, a former nurse, said he was delighted to be home.

He said: “I’m pleased were finally home but saddened that we never made it into the camp.

“Our reasons for going were to highlight the issue and to get word around about what is really going on over there.

“Everything was very uncertain when we were detained and it was scary not knowing what was what.

“We were strip searched down to our underwear and all of our valuables were taken off us. We were left with nothing but our underwear. That was a really hairy moment because we didn’t know what would happen.

“We were then taken for a medical and saw a social worker before we were brought to our cell.

“We never felt weak because of the sense of community that we had around us with other groups. The Belgians and the French joined us and I didn’t feel alone.”

The 56-year-old told of his delight as he was offered a twix bar on their release.

“As soon as we left on Thursday we all got a twix bar and it was beautiful. When we got on the plane the cabin were very helpful and offered us plenty of food which was great.

“I know my family were worried but they know I am ok and I’m really looking forward to seeing them.”

Fellow activist Lynn Leitch said: “It wasn’t a hunger strike but more of a show of solidarity for the Palestines. We refused to take food as a way of showing our support.

“We felt tired, some people were shaken but we were Ok. What we did is nothing compared to what they are going through.”

The campaigners are part of the Welcome to Palestine movement, who oppose Israel’s blockade of the West Bank

They are Joy Cherkaoui, 56, a council worker from Auldgirth, near Dumfries, Karolin Hijazi, 31, a doctor and lecturer at Aberdeen University, Jim Henry, 60, a retired nurse from Irvine, Lynn Leitch, 61, a retired teacher from Midlothian, and Terri McLaughlin, a nurse from Glasgow.

Other campaigners from the group were stopped from boarding a flight from the UK to Israel after the airlines were given a blacklist from Israel authorities.

Mr Cherkaoui was also involved in a protest in July last year, when 12 British people were detained in Israel while making an attempt to visit the West Bank town of Bethlehem.