Noisy buskers could be told to pipe down

Noisy buskers could be told to pipe down, following complaints that they are driving shoppers away.

Council officials in Glasgow have received a string of complains about pan pipers, electric guitar players and banjoists playing on the streets.

And now, politicians and angry retailers are calling for a clamp down on noisy buskers. 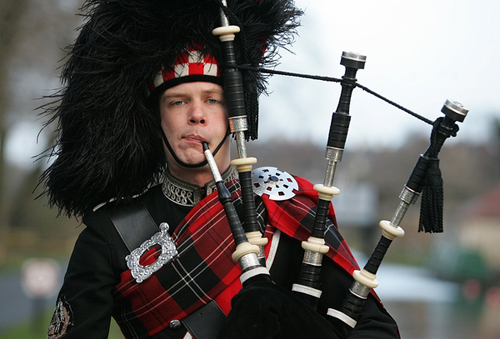 A piper rehearsing in an Edinburgh park

“No-go zones” and time curfews could be just a few of the restrictions put in place if retailers have their way.

Glasgow City Council said that they have been so inundated with complaints that a public consultation on street nuisance will be launched this summer.

The complaints from retailers and shoppers state that begging, loud music and fundraising can ruin the shopping experience.

According to the complaints, “shockingly” loud music can distract staff and has forced shoppers to abandon the shops all together.

And it is not Glaswegian buskers who are causing concern for worried retailers.

Shop-owners in Inverness and Edinburgh have also complained about loud musicians.

Busking is not a licensed activity in Scotland, meaning it is unregulated.

Police have powers however to stop buskers and seize equipment if causing “annoyance” but such enforcement rarely happens.

David Meikle, a Tory councillor in Glasgow, said he regularly received complaints about fundraisers and loud music in the city centre.

“I think we need to look at some sort of control over loud music, perhaps limiting it to certain locations and certain days and times.”

Stephen McCranor, director of communications at Greaves Sports, said they have had several complaints in their store due to loud street music.

“As a shopping destination,Glasgow city centre has so much more to offer than the out-of-town malls, but we do need to be wary of nuisance factors potentially putting people off making the trip,” he said.

“We’ve been in regular dialogue with Glasgow city council, they are addressing the issues but there’s still a long way to go.”

“There are occasional complaints when buskers turn up the volume.”

Meanwhile, a ban on bag-pipers was recently lifted in Vancouver, Canada during a visit by the Scottish culture secretary.

Mayor of Vancouver Gregor Robertson said he would “certainly” not support the restriction through efforts to regulate noise levels.

The ban was overturned during a visit to the city by Fiona Hyslop, the Scottish culture and external affairs secretary.

She said: “I welcome the fact that common sense has prevailed. The mayor has acted decisively and that bagpipes will once again be heard on the streets ofVancouver.

“Mayor Robertson and I both recognise that bagpipes are part of the cultural heritage shared byScotlandandVancouver.”

Breaking the bias over discriminatory pay on women’s day