SCOTS commuters have been left scratching their heads after billboards were erected warning of traffic chaos – caused by the London Olympics.

Despite being more than 400 miles away from the epicentre of the 2012 games, drivers in Edinburgh are being warned the event could cause congestion.

London is expecting more than 10,000 competitors from 203 countries to take part in 300 events. 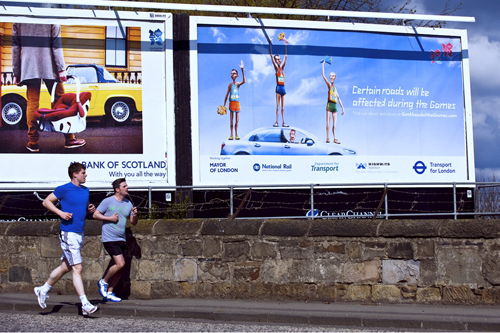 The billboards have appeared across the Scottish capital

Drivers in the Scots capital were baffled to be told “Certain roads will be affected during the Games.”

But Olympic bosses denied the billboard was a blunder, despite the nearest Olympic event being held 50 miles away when football is played at Hampden Park in Glasgow.

Games chiefs have spent £8.8 million on a campaign to publicise the road chaos, with drivers advised to visit the Transport for London website for details of delays.

The sign features logos for the Mayor of London, National Rail, Department for Transport and Transport for London – but neither it nor the website explain any provision being made in Edinburgh.

One driver who was perplexed by the sign was Kevin Lang.

The 32-yeaar-old said: I’ve got tickets for various athletic events in the Olympics so I’ve been drawn to anything with the London 2012 logo on it. This has left me scratching my head though.

“I’ve been a big supporter of the games but I’m a little bit unsure about how they are going to affect my commute. Maybe it’s a ploy to blame the traffic disruption from the trams on something else.”

Neil Greig, director of policy and research with the Institute of Advanced Motorists, was also baffled by the poster.

He said: I’ve seen a number of these billboards in London but I’m surprised and amazed to see them in Edinburgh.

“Transport for London are encouraging people to drive to the Games when it has been widly agreed that the Games can only work if people use public transport. This seems to be a screw up and a complete waste of public money. Traffic information is supposed to be accurate and relevant and this is neither.”

A spokeswoman for Transport for London refused to say how much the Edinburgh ads had cost.

She said: “This is a national campaign designed to raise awareness of travel restrictions during the games. There are Olympic events taking place in Glasgow, Newcastle and London, and these posters are to inform those who may be travelling by road to plan and plot their journey accordingly.

“The road network in host cities will be affected and it was felt best to inform those travelling by road that this would be the case. In total the Get Ahead of the Games campaign has cost £8.8 million nationally. How much of this was spent on these posters in Edinburgh I cannot say.”

The Games have already caused outrage in the Capital after plans were unveiled to hang a giant set of Olympic rings from Edinburgh Castle.

Protest cause the location to be shifted to the top of The Mound.