A SCOTS dog who adopted orphaned goslings has become a global internet sensation, after receiving over half a million views on YouTube.

The YouTube video shows Cara playing with the five yellow goslings, guiding them across a farmyard and watching over them protectively.

The caring canine, believed to be a German Shepherd, can be seen guiding the tiny birds with her nose, as well as “taking a head count” every so often. 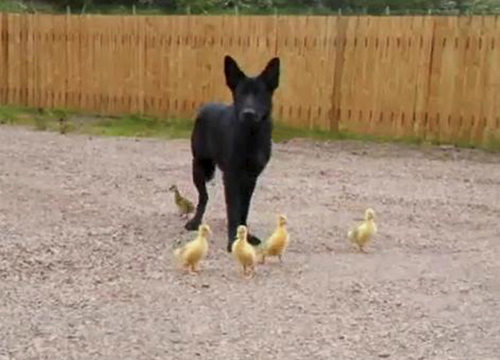 Cara seen here protecting the goslings in the farm yard

Cara adopted the goslings as her own when their mother was taken by a fox.

After the mother was taken, Cara took over and started to rear the goslings as her own.

On a trip to the Angus farm, a paragliding club captured the footage of Cara watching over the birds.

The footage was posted online and now the video has received close to 600,000 hits.

Cara’s owner Bonnie Blair-Imrie, 27, said she is proud of her rescue dog for raising the birds as her own.

“One of the geese laid eggs and was sitting on them when she was taken by a fox.

“We had a 24-hour dash to find an incubator to use to hatch the geese eggs. Once the goslings were born, Cara took them on as her own.

“The goslings began following her around the farm and saw her as a mother figure. They are followers by nature so they needed her.

“We had Cara fixed once she was old enough so we think she was making up for not having pups of her own.”

“A local paragliding club were in the area and stopped to get an ice cream; a member took the footage and uploaded it to YouTube. When I found out it has gathered over 500,000 hits, I couldn’t believe it. I’m amazed that many people have seen it.” 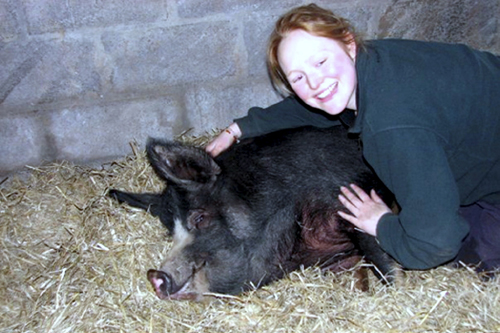 Bonnie set up the farm with her boyfriend Scott

Bonnie set up Lunan Life Farm with her boyfriend Scott Bremner, where they sell traditional pork, local foods and arts and crafts.

The couple are working on their next project and plan to open a beach cafe atLunanBay.

The former Ballet dancer said they rescued Cara from an animal shelter in Arbroath just days before the goslings were born.

Bonnie added: “She was brought into the rescue centre as she was found wandering the streets.

“She is quite a placid dog and makes friends easily.

“As for the goslings, they all grew up and only one of the five is still with us. The rest were sold. Once they goslings had matured, Cara left them be because she knew her job was done.”

And it’s not just goslings that the maternal dog has bonded with. 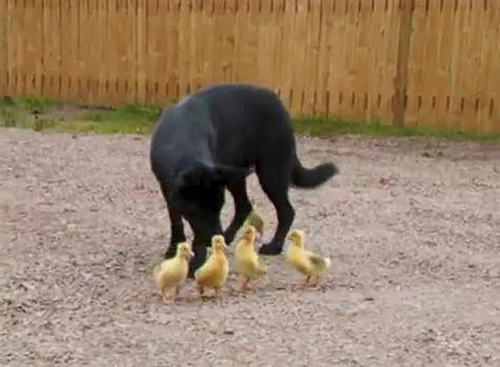 Bonnie added: “We have pigs, ducks, chickens, and goats and they all get on with Cara. When some of our ducks had ducklings, they started following her around too. It was amazing to see. She’s obviously very maternal.”

The YouTube video entitled “Goslings adopted by dog” has received over 436 comments and 1,518 “likes” on the page.

One posted: “I love how he looks at each of them every few seconds, like he’s doing a head count to make sure everyone’s there.”

Another said: “There are few things in nature more beautiful than inter-species love. Humans could learn a lot from this.”