HIBS fan Sam Martinez has had to wait until the age of 102 to see his team take on Hearts in the Scottish Cup Final – and now he is too old to make the match.

Mr Martinez is the oldest member of the Hibs Supporters’ Association and has been a fan of the club since he arrived in Edinburgh at the end of the war.

He has been unable to take to the terraces since his 90s but says he would be glued to the television as the team take on their city rivals Hearts in the Scottish Cup final. 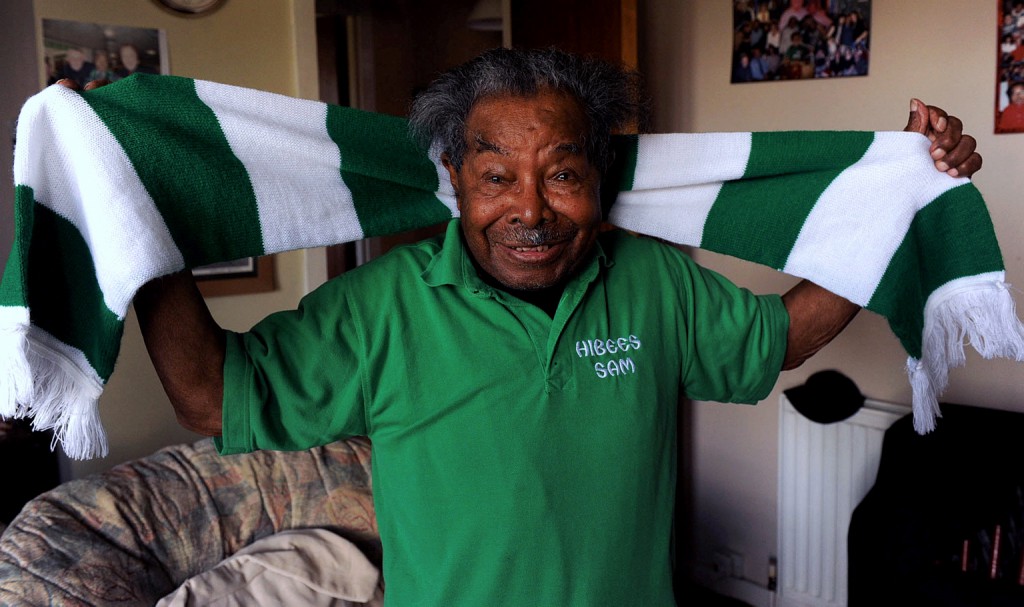 And he firmly believes that after years of being knocked out of the competition, this is the year that Hibs will lift the trophy.

He said: “I’m so glad I’m alive to see this happen, but it could be my last chance.”

After arriving in Edinburgh in the 1940s Mr Martinez stumbled upon the team after following crowds towards the stadium.

The former paper mill worker said: “I thought there was a riot going on and I got a bit of a fright because they were all singing and I was this perfect stranger.

“I jumped in the queue as the only black man there.

“So when a young man came up and gave me a complimentary ticket I thought he was taking the mickey. But he just said to me ‘Take it, you’re safe here’. And that was it.”

Talking of his memories of following the club for 70 years Mr Martinez said: “I went to many league and Scottish Cup finals over the year and they were well beaten every time.

“I always say to my friends that there had to be a curse over Easter Road. And yet may years ago I remember that this club beat Barcelona, Real Madrid, Manchester United and Juventus – now they are all top teams in the world.”

On one memorable occasion Mr Martinez was forced to make his own way home after being left behind when his team played in Montrose.

He said: “Not having any money, we had to walk the whole way back to Edinburgh.”

Talking of the challenge his team face, he said: “The cup final is going to be a difficult game for Hibs. All the years they have had Edinburgh derbies – if there are three games, Hearts will win two and Hibs will win one. Even the Famous Five found it difficult to beat Hearts.

“We have been waiting for a long time for this. I wish the players my best and will say al my best prayers for them.”

Mr Martinez travelled to Scotland in 1942 to join the war effort and worked among a group of 800 volunteers who took on forestry work in the Highlands.

After the war he moved to a hostel in Edinburgh – which was visited by then- Chancellor of the Exchequer.

Speaking to mark his 100th birthday, Mr Martinez said: “Harold MacMillan came to the hostel, and I made lunch for him – in those days it was all rationing.

“He had kippers, potatos, turnips, carrots and then custard and a cup of tea. He came down to the kitchen and said ‘By God that’s the best lunch I’ve had in a long time’.”