A LEAFLET inviting Scots students to attend a “Valentines F*** Fest” has been banned by the Advertising Standards Authority.

The Pearl Lounge nightclub in Aberdeen had distributed the flyers on the campus of the city’s university. 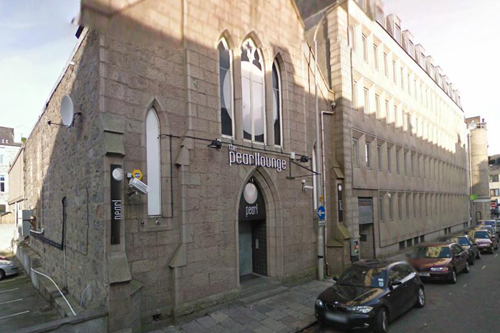 The flyer advertised a night at Aberdeen’s Pearl Lounge

Today the ASA upheld the complaint and said the leaflet should not appear in its current form again.

The leaflet, which also promised “more f***ing than David Attenborough could handle”, advertised a charity night.

In the original flyer the offensive words contained a single asterisk in place of the letter c.

The council said they were concerned that the phrase “go home with a stranger” would encourage “potentially unsafe practices”.

The bar claimed they did not support the message in the “tongue in cheek” promotion and said the event was later cancelled.

They said they now proofread all promotional material and worked with the council and students to avoid a repeat incident.

But the ASA upheld both complaints.

In a statement they said: “The ASA welcomed the advertiser’s assurance that similar promotional material would not be distributed in future.

“We noted the ad stated “Valentines f*** fest… see more f***ing than David Attenborough …” and considered that, because it was clear from the use of asterisks in the words “Fu*k” and “Fu*king” that they represented swear words, the ad was likely to cause serious or widespread offence to some readers.

“We considered that, because this was a potentially unsafe practice, the ad was socially irresponsible. We therefore concluded that it breached the Code.”

Reacting to the ban, Alex Johnstone, the Conservative MSP for the area, said: “I take a fairly liberal attitude to most things but this seems to be an attempt at shock tactics in advertisement.

“It’s a deliberate attempt to draw in those that are susceptible to this kind of advertising with the knowledge that some people will take offence.

“People that take offence at things only have to look to themselves but people that set out to give offence have a level of responsibility to live up to. The people that have put out this leaflet have deliberately tried to cause offence and this is irresponsible.

“I’m not one for banning things I disapprove of, but the process leading up to the ban of this material is in itself an adequate justification for the ban.”

Responding to the ASA decision, Tessa Birley, President of Aberdeen University Students’ Association, said the leaflets were “beyond poor taste.”

“The leaflets, which targeted students, went beyond poor taste, they were offensive and actively encouraged unsafe sexual behaviour.

“It is encouraging that the Pearl Lounge took responsibility for its mistake by not only cancelling the event but by committing to review all promotional material in the future to avoid a repeat of this offensive and dangerous event.

“We will be holding the club to this promise as well as its commitment to reach out to Aberdeen students to ensure that this kind of promotion will not happen again.

“Let’s hope this unfortunate incident will also be a lesson to other clubs and promoters in Aberdeen that they will be held to account when they their promotions cross the line.”

One student in Aberdeen said the advertisements were “rank.”

The fourth-year-student who did not want to be named, said: “It’s like something you might see in Amsterdam, not Aberdeen.

“It’s pretty rank and I’m very sure it would’ve put people off going- especially for valentines day when it’s already the most desperate night of the year.”

The flyer caused uproar in the city when it first appeared.

A university spokeswoman said in February: “Residents at our halls of residence have complained to university management on several occasions that they feel harassed and overwhelmed with the amount of unsolicited promotional flyers that are dumped onsite in a manner that endangers their safety and causes littering.

“The university considers these particular leaflets to be extremely offensive, promoting ‘going home with a stranger,’ and containing sexual innuendos which are particularly inappropriate considering the multicultural nature of our student community.”