TAXPAYERS forked out an estimated £3,000 to have a worker return cricket balls knocked into a construction site.

Dunfermline Knights Cricket Club lost part of its pitch five years ago as a result of flood prevention works in the town.

Cricket balls were regularly sailing over the high fence constructed on part of the outfield to keep out trespassers. 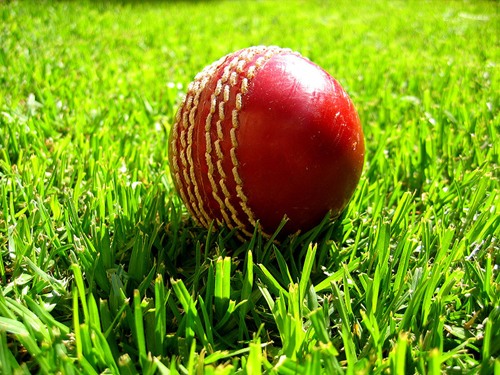 Fearful that cricketers would hurt themselves trying to get their balls back, Fife Council arranged for a member of the contractor’s staff to chuck them back over the fence.

It is understood the unofficial fielder was paid £10 an hour for the past two seasons to fetch balls at every six-hour cricket game.

One player at the club, who asked not to be named, said: “If the ball was whacked over or under the fence, this guy was there to throw it back.

“He was paid to be there throughout the whole game. The whole thing was very strange as there were some games where he had a lot of work to do.”

A local chartered surveyor, Rod McCrae, is representing residents in their compensation talks with the council.

He confirmed: “For two seasons, someone was employed to come to the games. They would turn up and stand around for six hours each time they played a game, throwing the balls back. It was ridiculous.”

Mr McCrae estimated the employee was paid around £10 an hour for the work.

If the Knights played 25 six-hour games during each season for two years, the cost is likely to be in the region of £3,000.

He added: “The outfield is still out of bounds and has yet to be reinstated. It all comes down to money- they’ve obviously run out of money and cannot afford to have the land reinstated.

Mr McCrae said the cricket club had been offered compensation by the council – of two cricket balls.

He said: “It’s unbelievable. The works have occupied a big section of their outfield for the fifth season.

“The team are now the laughing stock of the cricket league, as their pitch is in ruins.”

Robert Oxley of TaxpayerScotland said:  “Fife council has to find million in savings so it’s barmy to employ someone just to collect stray cricket balls.

“Taxpayers will be left stumped at why their money is being spent on a ball boy when the council is pleading poverty elsewhere.”

Dozens of angry residents and organisations are also seeking compensation for the effect the works – which were only supposed to last a year – have had on their properties.

Compensations cases will now be taken to the Lands Tribunal of Scotland.

Pat Reid, secretary for the Dunfermline Tennis Club said their courts will need resurfacing thanks to the project.

She added: “We’re looking for compensation but nobody’s offered us anything.”

Derek Crowe, Senior Manager with Fife Council, said: “The cricket club were losing quite a few balls, which we know are expensive for them, when they were hitting them into the construction site.

“So we simply asked a junior member of site staff to be on hand and throw back any balls that came over the boundary.”

The council said it could not provide any details of the cost.

A spokeswoman confirmed that a member of the contractor’s team was detailed to collect the balls, and admitted the cost of the task would have been passed back to the council.