THE Scottish Conservative and the Green party have joined forces to criticise Alex Salmond over his dealings with Donald Trump.

The Tories blasted him for “[refusing] to come clean on his questionable dealings with business billionaire Donald Trump.”

While the Greens called for the tycoon to be ejected from the GlobalScot network of business ambassadors. 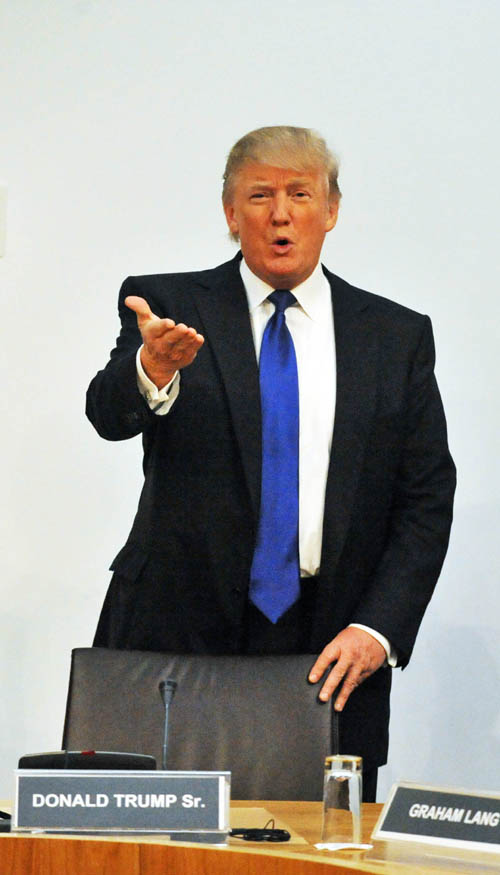 When questioned today by Scottish Conservative leader, Ruth Davidson MSP, on why he misled a parliamentary committee by refusing to mention a Manhattan dinner he had with the tycoon, Mr Salmond refused to answer.

The First Minister then contrived to mislead the parliamentary chamber by claiming that the Trump organisation had not threatened to withdraw from the Menie Estate project until the last few months.

Scottish Conservative leader Ruth Davidson said:  “Every time Alex Salmond opens his mouth on this issue he is digging a deeper hole for himself.

“Why did he refuse to acknowledge the intimate dinner he had with Donald Trump when specifically asked about it by a parliamentary committee just three months after the meeting?

“It would appear Mr Trump’s recollection of that night is considerably better than the First Minister’s.

“Is the First Minister seriously asking the Scottish public to believe that when a multi-billionaire, attracted to Scotland with great fanfare by his predecessor, was threatening to pull the plug on a major investment as soon as he took office, that he didn’t tell his new best pal he would get it sorted?

“Mr Trump claims the First Minister gave him such assurances at the dinner Alex Salmond hid from parliament. We need full disclosure on this issue.”

Meanwhile the Scottish Greens are accusing Alex Salmond of ducking an important question about Donald Trump during today’s First Minister’s Questions at Holyrood.

Mr Salmond failed to take up a suggestion from Green MSP Patrick Harvie to kick the US tycoon and climate change denier out of the prestigious GlobalScot network of business ambassadors.

Mr Harvie’s initial question about the proposed European Offshore Wind Deployment Centre that Mr Trump objects to was the first time Greens had been selected for First Minister’s Questions since last May’s election.

The Glasgow MSP suggested the First Minister was regretting being drawn into Mr Trump’s orbit, finding himself with a half-built carbuncle in his constituency and possible legal action against a vital site for offshore wind.

After the exchange Mr Harvie said: “It wasn’t a surprise that the First Minister stuck up for renewables. But it was a shame he failed to recognise the continued threat from Trump to our renewables potential and the way he is tarnishing Scotland’s reputation.

“This was a perfect opportunity for Mr Salmond to take a proper stand against a rich American windbag but he ducked it.”