A STONE inscribed with the Scots translation of Greek Poet Simonides work has been presented to the University of St Andrews by Historic Scotland to hang in its Main Library.

It was created as part of a BBC Radio programme linked to Professor Robert Crawford’s translations of the ancient epitaphs for western soldiers killed in conflicts 2500 years ago in the territories of modern Iraq, Iran, and Afghanistan.

Historic Scotland Traditional Skills Officer Charles Jones carved the inscription. The stone says “The city is the Dominie o the man” – dominie being the old scots word for teacher. 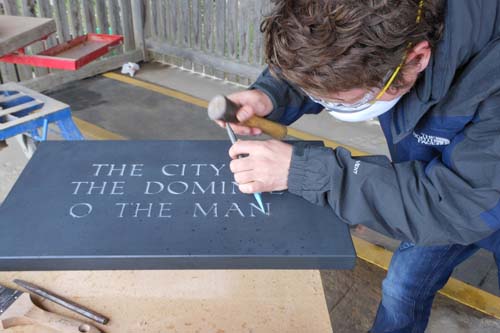 Charles said:“I was asked to begin the inscription as part of a BBC radio programme to reflect the classical tradition of inscribing these verses into stone. Letter Carving is a traditional skill worth preserving as inscriptions in stone have helped preserve the culture and identity of people and places for thousands of years.

“My role at Historic Scotland now is to promote traditional skills and I felt that this would be a good way to raise awareness that there are still people taking up stone carving and that there are opportunities for apprenticeships in stonemasonry.”

32-year-old Charles, who lives in Carnoustie, took around 13 hours to complete the project, with each letter taking around 30 minutes.

Charles originally joined Historic Scotland as a stonemasonry apprentice in 1996 and was based at Arbroath Abbey. After working as a stonemason at Durham Cathedral he returned to Historic Scotland in 2005. Since 2010 Charles has been working across Scotland to introduce young people to the possibility of following a career in traditional skills and to develop formal qualifications in craft skills, based at Argyll’s Lodgings at Stirling Castle.

He added: “I chose to use blue slate for the inscription as it is probably the best stone type for letter carving.

“I was interviewed as I worked on it and then when the programme was completed I offered to finish the inscription and asked the University Library if they would like it.

“I am delighted that my carving can add to the University of St Andrews 600th anniversary.”

John MacColl, University Librarian & Director of Library Services, said: “We are very pleased to have been presented with this modern translation into an old tongue of an ancient fragment of poetry cut out of ancient material by a skilled stonemason of the 21st century.

“It seems appropriate that a revitalised poem, from the haunting Simonides collaboration between Robert Crawford and Norman McBeath, made permanent through the efforts of a craftsman deploying an ancient skill, should be displayed in a library which has built collections over 600 years and whose task is to preserve meaning from the past for the world of the future.”

The slate will go on permanent display in the Main Library later this year.

Professor Robert Crawford’s  work is on show in Body Bags / Simonides – a hard-hitting exhibition of the poem fragments accompanied by black and white photography by Norman McBeath, currently on display in the University of Glasgow . Professor Crawford has written new versions of these ancient texts in the Scots tongue.  The revised texts appear alongside twenty five of McBeath’s timeless images that relate to death, losses, and remembrance.

The exhibition raises questions about dead or dying languages, as well as what language is fitting for remembering the dead.