A BAND of hardy Tayside Police officers and staff will cover almost 75-miles by bike and on foot along a route that will take them up the Great Glen from Fort William to Inverness, to raise money for the Maggie’s Centres.

Their ranks will be swelled by friends and family when they undertake the Maggie’s Monster Bike and Hike on Saturday, May 5 and Sunday, May 6, which comprises of a 30-mile mountain bike ride and a 43-mile hike.

Team Elspeth Brown is 20-people strong this year and is led by Steve Brown, police officer and husband of Elspeth, who loved the Maggie’s Centre and the support it provided her and continues to provide to her family. Elspeth died in April 2011 after a long and courageous battle with cancer. 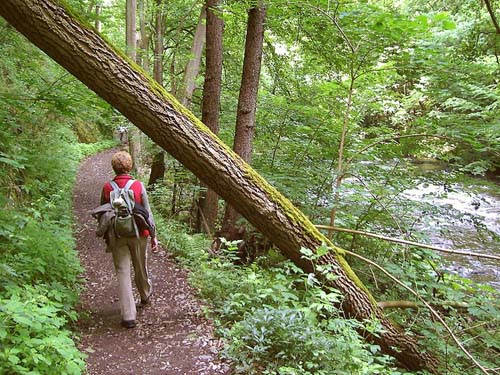 The officers will trek across the Great Glen  Photo:Michael Fiegle

Steve said: ‘‘Elspeth loved Maggie’s and was a regular visitor to them. The centre and staff in turn provided wonderful support and more to Elspeth and our family and they continue to do so. Elspeth has proved to be an inspiration for so many people from Burrelton, Coupar Angus the Blairgowrie areas and this is our way of saying thank-you for all that Maggie’s do. Indeed, our own team has almost doubled in size this year, all of them wanting to do something in her memory.

The team including Frank McManus, events organiser, held a horse racing and auction night at the British Legion Club, in Blairgowrie on Friday night, followed by a sale of raffle tickets at Tesco, Riverside, Blairgowrie, on Saturday. Both were aimed at boosting their ongoing fundraising efforts, for Maggie’s cancer centres.

The fundraising has taken many forms, including fancy dress discos, ceilidhs, raffles and coffee mornings, all of which allows the team to participate in this event and gives money to a fantastic cause.

A recent ceilidh and coffee morning saw the team raise in excess of £1500 and the team are now well on the way to raising, and hopefully exceeding, the total of £10,000 they set out for this year.

Those involved in team Elspeth Brown, previously known as Hot Fuzz, have raised well in excess of £50,000 since first coming together.

The team have fantastic local support and have the backing of Casey’s joiners, who have been huge contributors to the fundraising and the bike and hike.

The Robertson’s Rovers comprise of the Assistant Chief Constable, Constable Nicky Kerr of the Force Executive Support and Gordon McLeod, who works in the Force’s Communications Centre.

The Rovers are undertaking the challenge in memory of much-loved colleague Joyce Robertson, who worked in divisional administration at Forfar before she tragically died in November 2010.

Assistant Chief Constable Angela Wilson said: ‘‘We are the novice team given that this is the first year that we have tackled this test of endurance and we all expect a very tough physical challenge. But we will be bolstered by the fact that our efforts will help to raise money for this excellent charity.

‘‘Keep you fingers crossed for us that we are still in one piece at the end of the event. Please help us to help Maggie’s by donating through our Just Giving account.’’

Should you wish to support team Elspeth Brown or the Robertson Rovers, and indeed Maggie’s this can be done by donating through the teams’ just giving pages at www.justgiving.com/teamelspeth and www.justgiving.com/robertsonrovers