Martin McGuinness said that regardless of the outcome of the up-coming referendum, Scotland was now on a path that would “inevitably” lead to a break from the rest of the union.

He added that “the end of the Union as we know it” had been heralded by the Good Friday agreement of 1998. 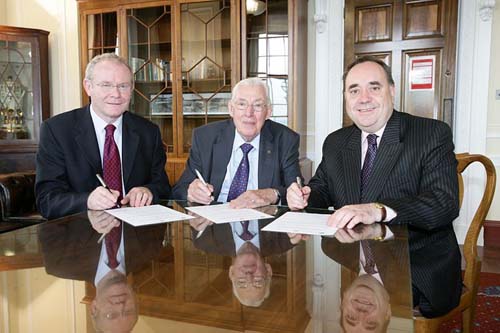 McGuinness , left with Ian Paisley and Alex Salmond, said Scotland was on a path leading to independence  Photo: Scottish Government

McGuinness, a leading figure in republican politics for more than 40 years, said: “Whatever happens during the course of the vote, whether people vote for it or if they don’t they will take a major step towards independence.

“There is an air of inevitability in that regard. That in itself will change the whole nature of the Union, and further encourage people.”

Mr McGuinness, who was instrumental in the peace process during the 1990’s, said that rising nationalism among Scots and the Welsh could tear apart the political union with England.

He said: “The years proceeding and following the First World War were a time of great political and constitutional upheaval for the British state.

“I firmly believe we are now living through a similar period of massive change – obviously not as dramatic as 10 years ago, but significant change nonetheless.

“My belief has been strengthened and confirmed not just by what is happening in Ireland, but also with events elsewhere, with the demand for Scottish independence and indeed greater Welsh autonomy. The constitutional fabric of the British state has been changed, and changed forever.”

He added: “As Ian Paisley said to me when we first sat down five years ago, ‘Martin we can rule ourselves – we don’t need these people coming over from England telling us what to do.’ That was common ground he and I could stand on.”

Mr McGuinness also called for Northern Ireland to be granted more control over their own fiscal policies. 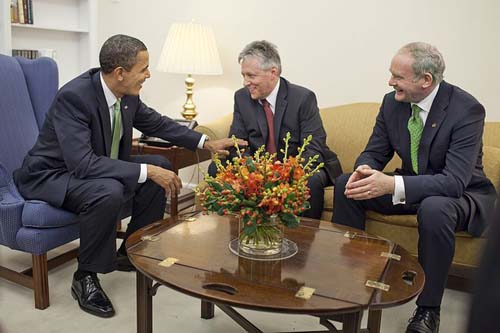 He said: “Many economic policies are devised in Westminster. We need more economic management in the hands of locally accountable representatives in the North of Ireland. We need increased fiscal autonomy. The British Government, at our behest, has started a consultation on the devolving of corporation tax to North.

“This is crucial in helping us rebuild and rebalance our economy. The British Government needs to go further. We need to transfer more fiscal powers from London to Belfast.”

“As an Irish republican and as a democrat i remain convinced of the right of the people of the island of Ireland to shape our own future from outside interference.

“In my view the future will be served by ending the Union and removing partition. There is now a democratic and peaceful way to achieve these objectives.”

Speaking at a conference earlier this year, Mr Robinson said Scotland played an important role in the union.

He said: “We want to see them continue that. We hope Scotland will know how much we want Edinburgh to remain within the UK.”