BRITISH astronomers have helped to gather the most direct evidence yet of a supermassive black hole shredding a star that wandered too close.

Supermassive black holes, weighing millions to billions times more than the Sun, lurk in the centres of most galaxies. These hefty monsters lie quietly until an unsuspecting victim, such as a star, wanders close enough to get ripped apart by their powerful gravitational clutches.

Astronomers have spotted these stellar homicides before, but this is the first time they can identify the victim. Using a slew of ground- and space-based telescopes, a team of astronomers – led by The Johns Hopkins University in Baltimore and including researchers from the Universities of Edinburgh, Durham and Belfast – has identified the victim as a star rich in helium gas. The star resides in a galaxy 2.7 billion light-years away. 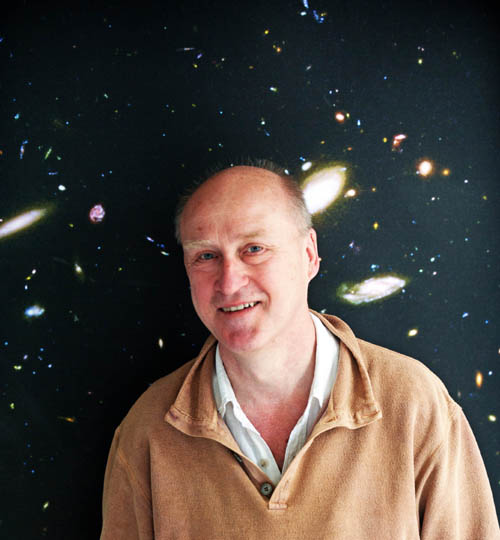 Prof Andy Lawrence, of the University of Edinburgh, took part in the research

The team’s results will appear May 2 in the online edition of the journal Nature.

Research team leader Suvi Gezari of The Johns Hopkins University explained: “When the star is ripped apart by the gravitational forces of the black hole, some part of the star’s remains falls into the black hole, while the rest is ejected at high speeds. We are seeing the glow from the stellar gas falling into the black hole over time.

“We’re also witnessing the spectral signature of the ejected gas, which we find to be mostly helium. It is like we are gathering evidence from a crime scene. Because there is very little hydrogen and mostly helium in the gas we detect from the carnage, we know that the slaughtered star had to have been the helium-rich core of a stripped star.” 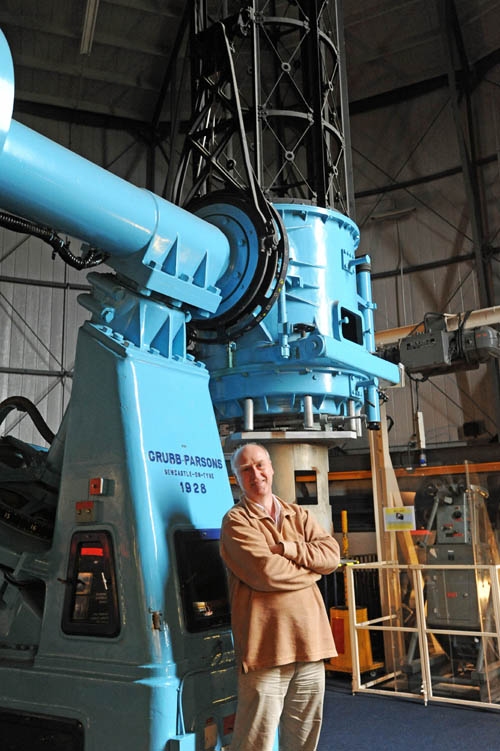 This observation yields insights about the harsh environment around black holes and the types of stars swirling around them.

This is not the first time the unlucky star had a brush with the behemoth black hole. Gezari and her team think the star’s hydrogen-filled envelope surrounding the core was lifted off a long time ago by the same black hole.

The star may have been near the end of its life. After consuming most of its hydrogen fuel, it had probably ballooned in size, becoming a red giant. The astronomers think the bloated star was looping around the black hole in a highly elliptical orbit, similar to a comet’s elongated orbit around the Sun. 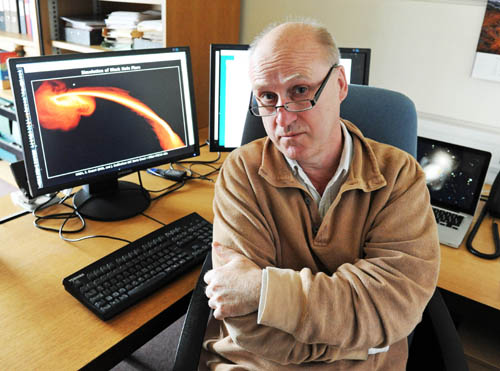 The scientists believe the star was on an elliptical orbit

On one of its close approaches, the star was stripped of its puffed-up atmosphere by the black hole’s powerful gravity. The stellar remains continued its journey around the centre, until it ventured even closer to the black hole to face its ultimate demise and was completely disrupted.

Astronomers have predicted that stripped stars circle the central black hole of our Milky Way galaxy, Gezari pointed out. These close encounters, however, are rare, occurring roughly every 100,000 years.

To find this one event, Gezari’s team monitored hundreds of thousands of galaxies with the Pan-STARRS1 telescope on Mount Haleakala, Hawaii. Pan-STARRS, short for Panoramic Survey Telescope and Rapid Response System, scans the entire night sky for all kinds of transient phenomena, including supernovae and Near Earth Asteroids, as well as the hoped for star-shredding events. 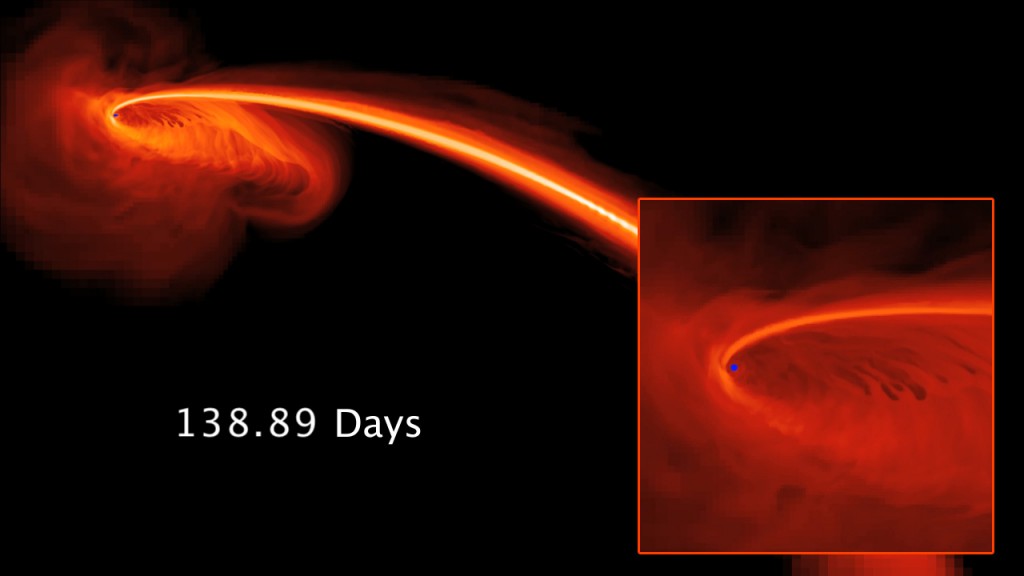 The research has allowed them to create a computer simulation

PanSTARRS was built by astronomers in Hawaii, and is operated by an international consortium, including the astronomers from Edinburgh, Durham, and Belfast. The same patch of sky was watched by GALEX, a space mission measuring ultraviolet light.

The team was looking for a bright flare in ultraviolet light from the nucleus of a galaxy with a previously dormant black hole. They found one in June 2010, which was spotted with both telescopes.

Both telescopes continued to monitor the flare as it reached peak brightness a month later, and then slowly began to fade over the next 12 months. The brightening event was similar to that of a supernova, but the rise to the peak was much slower, taking nearly one and a half months.

“The longer the event lasted, the more excited we got, since we realized that this is either a very unusual supernova or an entirely different type of event, such as a star being ripped apart by a black hole,” said team member Armin Rest of the Space Telescope Science Institute in Baltimore, Md.

By measuring the increase in brightness, the astronomers calculated the black hole’s mass to be several million suns, which is comparable to the weight of our Milky Way’s black hole.

Spectroscopic observations with the Multiple Mirror Telescope (MMT) Observatory on Mount Hopkins in Arizona showed that the black hole was swallowing lots of helium. Spectroscopy divides light into its rainbow colours, which yields an object’s characteristics, such as its temperature and gaseous makeup.

“The glowing helium was a tracer for an extraordinarily hot accretion event,” Gezari said.

“So that set off an alarm for us. And, the fact that no hydrogen was found set off a big alarm that this was not typical gas. You can’t find gas like that lying around near the centre of a galaxy. It’s processed gas that has to have come from a stellar core. There’s nothing about this event that could be easily explained by any other phenomenon.” 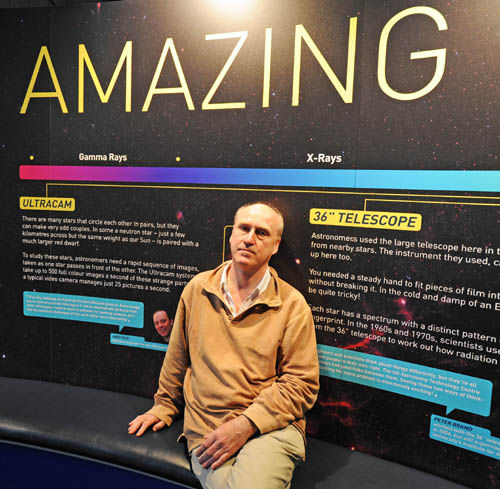 Researchers in Edinburgh, Durham and Belfast worked with Johns Hopkins University in the US

“As the object faded, it stayed hot, so we knew it wasn’t a supernova – they cool down” said Andy Lawrence, a team member from the University of Edinburgh.

“The ultra-fast gas velocity is something we also see in Active Galactic Nuclei – but seeing only Helium was like nothing I’ve ever seen in an active nucleus”.

To completely rule out the possibility of an active nucleus flaring up in the galaxy, the team used NASA’s Chandra X-ray Observatory to study the hot gas. Chandra showed that the characteristics of the gas didn’t match those from an active galactic nucleus.

“This is the first time where we have so many pieces of evidence, and now we can put them all together to weigh the perpetrator (the black hole) and determine the identity of the unlucky star that fell victim to it,” Gezari said.

“These observations also give us clues to what evidence to look for in the future to find this type of event.”