CONTROVERSIAL Scots comic Frankie Boyle has made another Twitter jibe at Katie Price.

The Glasgow-based comedian sparked fury last year when he joked about the glamour model’s disabled son during a stand-up routine.

But Mock The Week star Boyle ignored previous criticism by making fun of the page-three girl on Twitter this week. 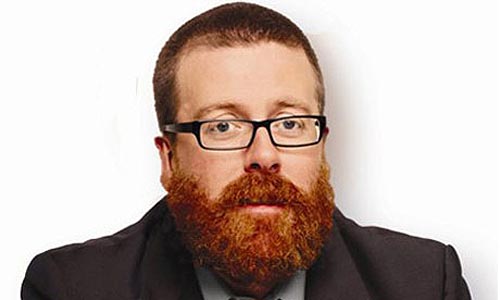 Boyle showed no remorse for his previous comments to Miss Price.

Showing no remorse for his previous comments, Boyle tweeted his reaction to the news of Miss Price’s engagement to Argentinian toyboy Leonardo Penna.

Under his Twitter handel @frankieboyle, he wrote: “Jordan and her husband to be are worried about the language barrier. Providing neither of them ever learn English, they should be fine.”

The comment was then re-tweeted more than 50 times by his followers, with one user writing: “Isn’t it time you let off Jordan a bit?’ another follower added: “love your Jordan jokes hahaha”.

On Tramadol Nights, which was watched by an audience of one million, Boyle told viewers: “Jordan and Peter Andre are still fighting each other over custody of Harvey – eventually one of them will lose and have to keep him.”

39-year-old Boyle was slammed for his vicious comment, with Ms Price calling him a “disgrace.”

Speaking at the time, the glamour model said: “Harvey is such an amazingly brave child. The daily battles he overcomes fill me with such pride and inspiration.

“So when I hear Frankie Boyle continues to push his disgraceful, small-minded and puerile jokes, mocking not only Harvey but other people with disabilities, it shows me what a coward he is.”

Not shy of Twitter controversy, the Scots comedian angered animal lovers earlier this year by tweeting that it would be funny if Edinburgh Zoo’s pandas died, writing, “I genuinely just had a wee chuckle at the thought of those pandas dying. How sh**e that would be for Scotland. How appropriate. Night”.

He was also slammed for a tasteless joke following the appearance of the parents of missing Madeline McCann at the Leveson Inquiry into press standards.