AS part of the year of celebrations marking 450 years of golf on Montrose Links, at the end of June, 450 golfers will descend on Montrose’s two golf courses to participate in Montrose 450’s Weekend of Celebration.

The Weekend of Celebration will tee off on Friday, June 29 with a Civic Reception at the Park Hotel hosted Angus Council.

David May, spokesperson for Montrose 450, explained that captains and senior office bearers of the three Montrose Golf Clubs will be invited to this event, along with sponsors, members of Montrose Golf Links Committee, the committee managing the Montrose 450 celebrations and local councillors and dignitaries. 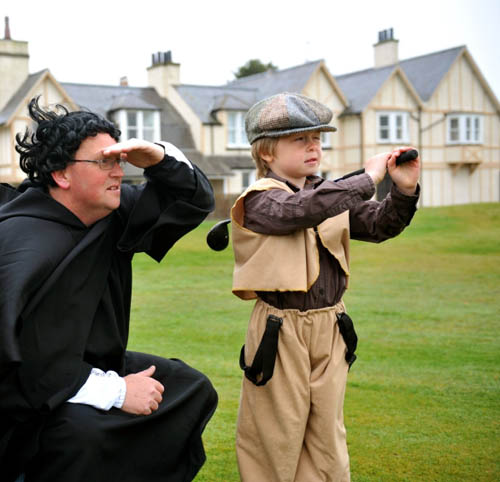 On Saturday, June 30 and Sunday, July 1, 450 golfers will take to the Montrose Medal and Broomfield courses to compete in an individual tournament and competitions for Gentlemen, Senior Gentlemen, Ladies, Juniors and All Players.

“As a result, on Saturday, play will be restricted to members of Montrose golf clubs who are also Montrose Golf Links season ticket holders. However, on Sunday, July 1, a limited number of tee times will be available for non-members and non-season ticket holders. We’re hopeful this will encourage golfers from far and wide to make the journey to Montrose Links and experience how 450 years of golfing heritage has shaped two of the best links courses in Carnoustie Country, the cradle of golf.”

Jason revealed that all golfers who take to the Montrose Links on June 30 or July 1 will receive a commemorative Montrose 450 gift. “In addition,” continued Jason, “many prizes will be up for grabs in both days’ competitions, including an antique hickory-shaft putter, sponsored by Carnoustie Country, for the best 18-hole score over the two days.”

As part of Montrose 450’s Weekend of Celebration, on Saturday, June 30, there will be a formal dinner at the Park Hotel, which will include a charity auction and an insight into the world of golf by Alistair Low, Captain of the R&A. “As Montrose is one of the first towns where golf was played, this evening promises to be a wonderful celebration of the history of this fabulous game – and the future, which is a very important aspect of Montrose 450,” added David May.

“Montrose 450 features several initiatives to ensure golf remains one of the most popular sports in our local area by encouraging and supporting junior golfers in Montrose.

“One of the highlights of the weekend will undoubtedly be the large number of golfers of all ages and all abilities playing the Montrose Medal and Broomfield Golf Courses. It will be truly magnificent to witness 450 golfers taking to the Montrose Links to celebrate Montrose’s 450-year golfing history with a round of golf.”