EDINBURGH Bus Tours has been confirmed as Scotland’s second most popular paid-for tourist attraction in 2011.

Based on figures compiled by experts at Glasgow Caledonian University, the award-winning bus tour operator has risen one place from 2010 to be ranked second behind Edinburgh Castle (1,302,825). 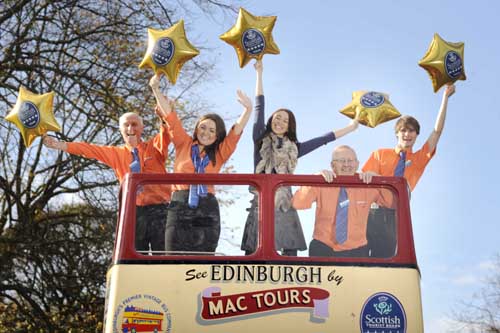 Ian Craig, Managing Director of Lothian Buses which owns Edinburgh Bus Tours, commented: “We had an excellent year in 2011, so are delighted to be recognised as Scotland’s second most popular paid-for tourist attraction.

“As part of Lothian Buses, Edinburgh Bus Tours is firmly committed to offering domestic and overseas customers the highest quality of informed, entertaining visitor experience, which is now seen as an essential part of any visit to the city.  I am very proud of all our staff who through hard-work and a true passion for their job, have helped achieve this latest impressive milestone within what is a highly competitive marketplace.”

Edinburgh Bus Tours now offers five high quality open-top bus tours.  Each is tailor made to offer distinctive and entertaining experiences and to provide an inspired introduction to the history and culture of the Capital.

The City Sightseeing, Edinburgh Tour, MacTours City Tour, Majestic Tour and the recently launched Edinburgh World Heritage Official Tour are operated throughout the year.  During the summer season, the company also operates the Bus and Boat tour in conjunction with Forth Boat Tours.

Visitors can choose from a live guided tour in English or a pre-recorded tour in a range of languages including the main European languages plus Russian, Japanese and Mandarin Chinese.

In April 2012, Edinburgh Bus Tours also extended its audio guided walking tours to four with the launch of the ‘Leith Tour.’  In a partnership with the charitable organisation Leith Trust, the two-stage, one hour walks incorporate key sites of historical interest in and around Edinburgh’s historic port.  It’s a perfect accompaniment for visitors who hop off the Majestic Tour at Leith.

Reflecting Lothian Buses commitment to operate one of the most modern and environmentally friendly fleets in the UK, passengers enjoy their tours aboard a low floor fleet, each with a designated wheelchair space.  Buses also feature a TV screen downstairs with a subtitled version of the tour for the hearing impaired.