A THUG bit off part of a man’s ear in a bar brawl – then picked up the severed body part and ATE it.

The horrifying incident at a pub in East Lothian was captured on security cameras.

Lothian and Borders Police are hunting the vicious attacker responsible for Sunday night’s assault in Tranent. 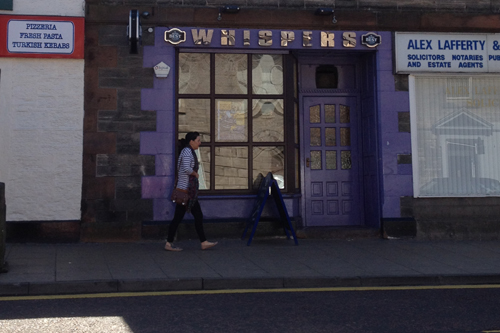 The victim, 39-year-old Graeme Aitken, has been left permanently disfigured by the attack in Whispers Bar, Tranent.

He said: “The CCTV we have at the pub is of an extremely good quality and you can see the guy pick up the bit of ear and put it in his mouth.

“He definitely didn’t spit it out. He swallowed it.”

The victim had been drinking at other pubs in the town before arriving at Whispers at around 9.30pm.

He added that the bar was almost empty due to the Old Firm match earlier in the day.

He said: “We were quiet. Everyone steers clear of the pubs in Tranent on Old Firm days because there’s always trouble.

“It’s absolutely horrendous that my hard working staff have to witness things like this when all they are trying to do is their job.”

The victim was taken to Edinburgh Royal Infirmary and is believed to have been transferred to St John’s Hospital in Livingston for reconstructive surgery. It is understood he returned home on Tuesday.

The alleged assault took place just yards from Kopas Takeaway, where 59-year-old John Auld died on March 4. Two men have since been charged with his murder.

George Hood, a fellow publican and chairman of Tranent and Musselburgh Pubwatch, said he was planning to ask the scheme members to ban both the victim and alleged attacker from the town’s pubs.

Police sources have revealed that it is likely a warrant for the arrest of a man in connection with the incident will be issued later today or tomorrow.

A spokesman for Lothian and Borders police said: “We have sent a report to the Procurator Fiscal and someone is now subject to an arrest warrant.”

A police spokesman said: “During the struggle, the victim has had the top of his right-ear bitten off and will be left with permanent disfigurement.

“We are keen to trace the suspect responsible for this attack and would urge any patrons who were within the Whispers Lounge on Sunday night and who witnessed the assault to contact police immediately.

“Similarly, anyone with any other information that can help with our investigation is also asked to get in touch.”