A RACE against time to find a suicidal teenager ended in tragedy after the 18-year-old apparently threw himself from a cliff.

A sniffer dog led the teams to the edge of Seaton Cliffs in Arbroath, Angus where horrified rescuers discovered a hat and jacket placed at the cliff’s edge. 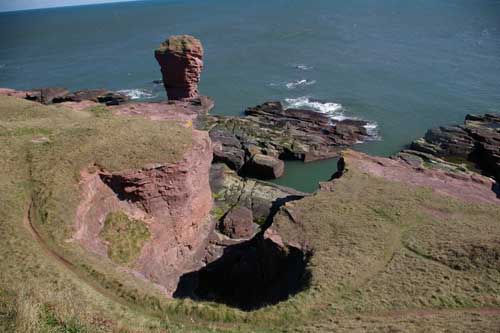 The teen was discovered near the Deil’s Heid area of the cliffs  Photo:Alan Morrison

The victim was airlifted by RAF helicopter to Ninewells hospital in Dundee with “serious injuries” but later died.

A source close to the operation said: “A sniffer dog took them to the cliff edge. The police were dealing with it and required coastguard assistance.

“It was in the Deil’s Heid-Dickmonts Den area.  There was a report of a jacket and a bunnet at the top of the cliffs.

“He was airlifted to Ninewells hospital so he must have been alive.”

The source said the death appeared to be suicide.

A spokeswoman for Tayside police said: “At about 11.40pm last night emergency services were alerted to a missing 18-year-old man in the Arbroath area.

“Information suggested he may be in the area of Arbroath cliffs and a search began.  This included police officers with a police dog, coastguard and a ARCC helicopter from Kinloss.

“The deceased details will not be released until he has been formally identified.  There are no suspicious circumstances surrounding the incident and as with all sudden deaths a report will be submitted to the Procurator Fiscal”.

The beauty spot has been the scene of a number of tragic deaths of the years, with many others having near misses.

Earlier this year an 18-year-old sparked a dramatic rescue after scaling the cliffs to retrieve a lost football.

In 2006 64-year-old Glynis Stewart died after falling from the cliffs.

And in 2003 an 11-year-old girl, Nicole Barthorpe died after falling while apparently trying to retrieve a dropped bag.

The cliffs are also popular with people taking part in the extreme sport of tomb stoning. In 2010 Angus council installed CCTV cameras in an attempt to deter the thrill-seekers.