Using cutting-edge measurement technology, they have concluded that the range, which stretches for 400 miles between California and Nevada, is rising at a relatively fast rate of one to two millimetres each year. The team’s data suggests that long-term trends in crustal uplift could have formed the modern Sierra in less than three million years. 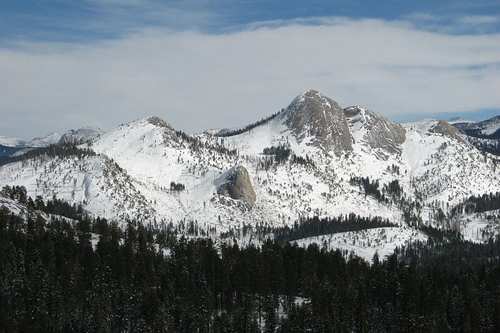 Scientist have discovered how fast the mountains are growing  Photo:Justin

The research team, led by Professor Bill Hammond in the United States collaborating with Dr Zhenhong Li in Glasgow, used satellite-based GPS data and InSAR (space-based radar) data to calculate the movements of the range with an unprecedented degree of accuracy. The calculations show that the crust moves upward compared to Earth’s center of mass and compared to relatively stable eastern Nevada.

Dr Li, of the University of Glasgow’s School of Geographical and Earth Sciences, said: “We have access to data from the GPS network going back 11 years, and from InSAR back 18 years, which gives us a rich data set to work from. Using an advanced time series algorithm developed in Glasgow, we can analyse the satellite-based radar data to recover the evolution of surface movements since the early 1990s over a region of 250 kilometres by 100 kilometres. The satellite radar images provide measurements every 20 metres, which allows tremendous detail in our results.

“We can further combine the information from both GPS and InSAR datasets to build an extraordinarily detailed picture of how the Sierra Nevada range has developed over time. We can measure the changes in the range with accuracy better than one millimetre per year.”

The data may help resolve an active debate regarding the age of the modern Sierra Nevada of California and Nevada in the western United States. The history of elevation is complex, exhibiting features of both ancient (40–60 million years) and relatively young (less than 3 million years) elevation. The ‘young’ elevation is the uplift the team have tracked.

Professor Hammond, of the University of Nevada’s Nevada Geodetic Laboratory, said: “The Sierra Nevada uplift process is fairly unique on Earth and not well understood. Our data indicate that uplift is distributed along the entire length of the range, between latitude 35°N and 40°N, is active, and could have generated the entire range is less than three million years, which is young compared to estimates based on some other techniques.  It basically means that the latest pulse of uplift is still ongoing.”

Seismologists indicate the mountain range may have risen when a fragment of lower plate peeled off the bottom of the lithosphere allowing the “speedy” uplift, like a ship that’s lost its keel. Possibly contributing to the rapid uplift is the extension in Nevada and a response to flow in the mantle. In comparison, other ranges, such as the Alps or Andes, are being formed in an entirely different process caused by contraction as two plates collide.

GPS data for their research is collected through the team’s MAGNET GPS Network plus over 1200 stations from the NSF EarthScope Plate Boundary Observatory and over 10,000 stations from around the entire planet. These stations include hundreds that cover Nevada, California, Oregon, and Washington. The radar data used in this research were collected by the European Space Agency’s ERS-1, ERS-2 and ENVISAT satellites.

The research was funded in the U.S. by the National Science Foundation and NASA, and in the U.K. by the Natural Environment Research Council”.

Their paper, ‘Contemporary uplift of the Sierra Nevada, western United States, from GPS and InSAR measurements’ will be published in the peer-reviewed journal Geology in July.