A HEAVILY pregnant woman had to be rescued from an island after being cut off by high tides.

The woman, named locally as Itayi Makota, is thought to be just two weeks away from giving birth.

The woman, who’s thought to live in Edinburgh, was rescued by the RNLI boat from Queensferry after getting stuck during an afternoon stroll on Cramond Island in the Firth of Forth at around 4.20pm on Sunday. 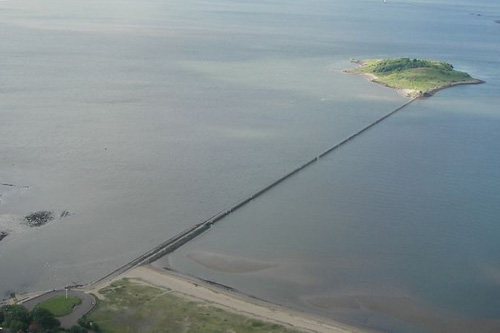 The causeway is submerged at high tide  Photo:Mtcv

The path across to Cramond Island, near Edinburgh, is is completely submerged at high tide.

Coastguards recommend the crossing is only attempted during the two hours either side of low water.

The dramatic rescue took place as the earth was subject to a supermoon, when the full moon is at its closest point to earth.

The phenomenon can cause perigean spring tides, where tides can be slightly higher and lower than normal.