HISTORIC Scottish regimental names are to be done away with in just two years, under controversial government plans.

The move is part of wide-ranging defence cuts, which will also lead to the loss of at least on battalion.

The Black Watch, the Argyll and Sutherland Highlanders and the Royal Highland Fusiliers names are all for the chop under the plans. 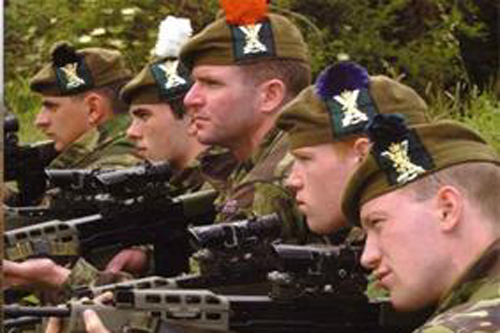 The distinctive coloured hackles of the five battalions could be lost  Photo:Ldopa

Mr Hammond claimed the titles have fallen out of use since Army reforms in 2006 and that the Black Watch is now more commonly known as 3 Scots.

Under the plans the Black Watch, 3rd battalion the Royal Regiment of Scotland would be known simply as 3 Scots, while the Argyll and Sutherland Highlanders would take on the name 5 Scots and the Royal Highland Fusiliers would be known as 2 Scots.

Mr Hammond insisted: “The ancient cap badges have largely gone, they are attached in brackets to some unit names.”

It is expected the names would be axes by the end on 2014 but a defence source said the move had sparked a backlash from the former and current military community.

Lt Col Sir Andrew Ogilvy-Wedderburn, former Commanding Officer of the Black Watch, called the loss of the name a “tragedy”.

“People turned out in their droves to see the Black Watch parade through Perth, Dundee, Kirkcaldy and Forfar when they recently returned from Afghanistan.”

The SNP defence spokesman, Angus Robertson said the decision to amalgamate the Scottish regiments was pushed solely by London-based politicians.

He said: “It was a small comfort that the unique identities of the battalions would be preserved. Now even that seems to be at risk.

“The disbandment of these senior units would be an intolerable betrayal by the UK government. It brings into focus the shocking decline of Scottish recruiting units and starkly exposes the extent to which the UK Government are running down Scotland’s defence capabilities.”

It’s understood that the battalions being considered for abolition are the Highlanders (4 Scots) and the Argyll and Sutherlands, with a decision due at the end of May.

But fears have also been voiced over the future of the Royal Scots Dragoon Guards, a German-based tank regiment.

Units which recruit from elsewhere in the commonwealth, such as from Fiji and the Caribbean, are most at risk of being axed, according to Mr Hammond.

Mr Hammond said: “Clearly the army can’t get smaller by 17% without losing some units.

“I can’t say to you that there will be no loss of battalions in the infantry as we downsize the army. We are looking at the options in the Army and the armoured corps.”

A military source said: “There is anger about this. The Scots battalions have been hitting their recruitment targets and are performing as well as any other units.”

MOD spokeswoman said: “A review of the future structure of the Army is ongoing and no conclusions have yet been reached. As General Sir David Richards, Chief of the Defence Staff has stated previously, the Army is confident it can meet its target of 82,000 by 2020. This is in line with the agreement between the Defence Secretary and the Chief of the General Staff for a gradual move towards the new Army structure so operations are not adversely affected by necessary changes.”

The Royal Highland Fusiliers was formed in 1959 by the amalgamation of the Royal Scots Fusiliers, with the Highland Light Infantry (City of Glasgow Regiment).

The Highlanders regiment was created in 1994 after the Queen’s Own Highlanders (Seaforth and Camerons), which itself was formed by a merger in 1961, and The Gordon Highlanders joined forces.