OLYMPIC legend Sir Chris Hoy has revealed he buys trousers that are two sizes too big  – just to fit his massive thighs.

The 36-year-old cycling star  said his waist size remains a youthful 32-inches, particularly impressive given that he is 6ft 1in tall and weighs more than 14 stone.

But he revealed in an interview at the weekend that he has no  choice but to buy trousers with a 36-inch waist just to squeeze in his gigantic legs. 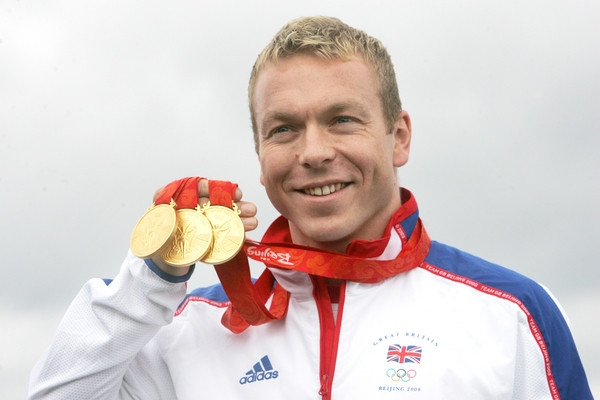 Sir Chris, whose thighs are 27 inches in circumference – bigger than Victoria Beckham’s waist – admitted: “There’s no way I can fit into skinny jeans.”

The same thighs have powered Sir Chris to win four gold Olympic gold medals, enabling him to reach a whopping 48.8mph on a bike.

But Sir Chris revealed in the same interview that such speeds are too slow to satisfy the speed freak in him.

He recently splashed out on a Lotus 2-Eleven track car which can reach 0 to 60mph in 3.8 seconds.

Sir Chris also reveals a more surprising element to his character – an obsessive love of coffee.

The Manchester-based Scot said he attended a course in Australia which taught him to be a barista – someone professionally trained to prepare and serve espresso coffee.

“I’ve got right into it- the beans, the grinding- but the more I learn, the harder it is to enjoy other people’s coffee because there’s nowhere else I can get a decent one, except when I’m in Australia.

So obsessed is he by coffee, Hoy even uses a picture of a cup he brewed himself as his Twitter background.

Sir Chris said he was thinking about life after this summer’s London Olympics, particularly spending more time with his wife, Sarra, who he married in 2010.

“Cycling is first but that won’t last forever and it will be nice to be able to put her first,” he said.