What a hoot: Owl found at football stadium

A TAME owl has been rescued after being discovered in the stadium of a first division football team.

The Scottish SPCA was called to rescue the barn owl from Livingston FC’s Almondvale Stadium after it was spotted sitting in a plant pot outside the reception area of the building on Sunday at around 6.30pm.

Inspector Jenni Surgeon rescued the confused owl and took it to the Scottish SPCA’s National Wildlife Rescue Centre at Fishcross near Alloa, where it is currently being cared for. 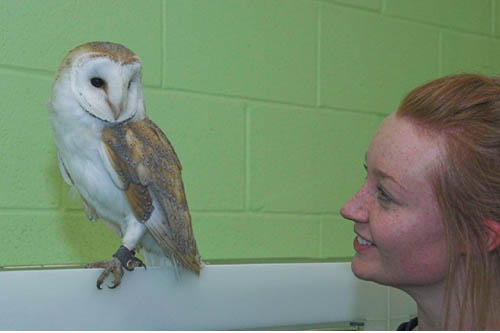 The barn owl was discovered sitting on a plant pot

Inspector Surgeon said, “The owl is clearly a captive bird as it has a ring attached to its leg and it is happy to be handled.

“Unfortunately we have not been able to trace an owner, so we are hoping that someone will recognise the bird and come forward to claim it.

“It’s a lovely adult barn owl and in decent body condition so either it hasn’t been missing for long or it’s been fending for itself with some success.

“We are sure someone must be missing this bird and we’d like them to get in touch.”

Anyone who recognises the barn owl is being asked to call the Scottish SPCA Animal Helpline on 03000 999 999.