THE organisers of the Edinburgh Fringe have been condemned for banning swear words from the official programme.

Stars of the world-famous arts festival are fuming after rude words in show names were with toned down with asterisks and questions marks.

The official programme has also censored the blurb written by comedians about their shows. 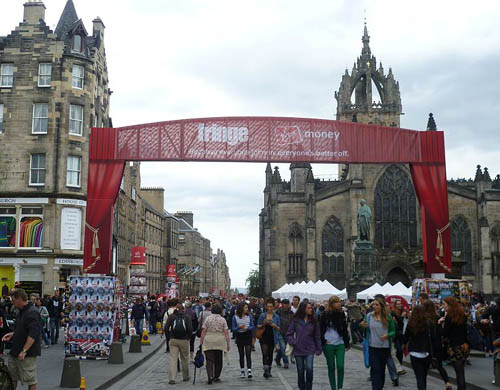 The Fringe Festival is 65-years-old.

The 65-year old festival is famous as a stage for free expression, but fringe organisers defended their decision to tone down the programme, of which 400,000 copies are printed.

They say the restrictions will protect children involved in the festival.

But the decision to make the publication more family-friendly has been condemned as “petty censorship”.

Fringe veteran performer Richard Herring, had an asterisk added to the title of his shoe so it read: “Talking C*ck”.

In 2002, a show of the same name was untouched, and Herring said the new policy would have “serious repercussions for artistic freedom”.

He added: “I can’t recall ever having come across such petty censorship before. What if there was a kids’ show called Cock-a-doodle-do, would that get censored? What if Dick Van Dyke played at the Fringe? Or Joe Cocker?

“I am concerned about the Draconian level of censorship that is occurring here and what it says about what the Fringe is turning into.”

Stand-up Stuart Goldsmith was left fuming after an exclamation mark was added to the title of his show so it read as “Pr!ck” in the programme.

He said the change could lose him ticket sales, and would not show up during an internet search for his show.

John Fleming, who will stage the Malcolm Hardee (corr) Comedy Awards, and has been attending the Fringe for 27 years, said comedians were protesting the move, which he called “idiotic” and “potty”.

Mr Fleming, who has been attending the Fringe for 27 years, said: “In 2009, I did a show that had a swear word in the title. There wasn’t a single complaint. I don’t understand having an exclamation mark instead of an ‘I’, you can still read it.”

Viz co-founder Simon Donald added: “This is crazy. It’s supposed to be an arts festival which is all about being open-minded and having the opportunity to speak openly.”

Neil Mackinnon, head of external affairs for the Fringe, said that decisions over the content of the listings were taken on a case by case basis and insisted there had been no deliberate shift in policy.

He said: “It is not for us to vet the content of anyone’s shows – that’s one of our principles – but the listings have to be read by people of all ages. There are over 200 children’s shows so there has to be some restriction