AN unemployed cleaner and bank worker have become the first openly gay couple in Scotland to publicise a massive Lottery win.

Darren Morgan and Graham Muir, who have been together for 10 years, scooped over £850,000.

Graham, from Dalkeith, Midlothian, bought the winning ticket last Wednesday – using the same five numbers he has used for the past five years. 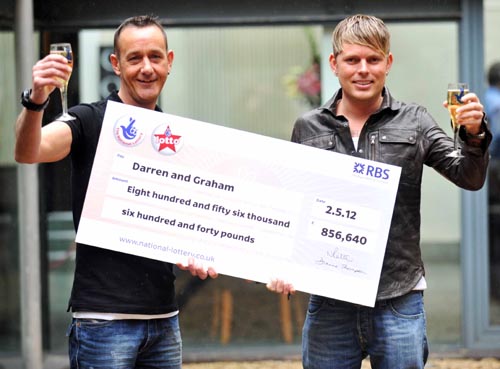 Happy couple Graham, left, and Darren, right, with their winnings

The 47-year-old has been scraping by for months on unemployment benefit of £67.50 is considering treating himself to a Rolex.

But Graham, 36, who shares a charity-owned house with Graham, has already splashed out on a £40,000 Range Rover Evoque.

The couple met when Darren was travelling across Europe ten years ago.

Darren, originally from Neath, South Wales, said: “We were absolutely gobsmacked when we found out. We always play the same numbers and Graham nearly changed them at the last minute but he said he’d give it one more go.”

The couple bought their winning ticket in the Co-operative store on Newtongrange high street, Midlothian.

Graham said: “I can’t believe I was going to change the numbers.

“I don’t even want to think about what I would’ve done if my numbers came up and I didn’t play them. But luckily I don’t have to.”

He added: “Last week we were struggling to pay the gas and electricity bills and now we’re on top of the world.”

Graham said they were determined to have fun with the money first. 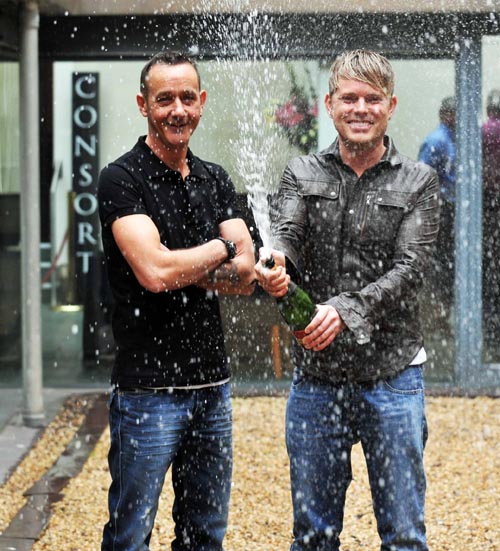 He said: “We’ll definitely go on a cruise and Darren bought himself a car. I wanted to buy a Rolex before I realised how expensive they are but we’ll see.

“We want to buy a house as an investment but we’ll stay in the house we are in at the moment.”

Darren, a customer care worker for the Bank of Scotland, said of his recent purchase: “It’s my first real car but it won’t arrive for 4-6 months so I’ll have to get the bus until then.

”We’ll need a holiday after all of this. It’s very draining because we’ve been getting calls from all of our family and friends since the win but it’s nice to be able to share
good news.”

But there is sadness behind the win for Graham whose mother passed away in September, just a year after his father died.

He said: “I’m just sorry that my mum isn’t here to share the fun with us.

“I cared for her for ten years and she sadly passed away last year from MS.

“I wish she was here to see that we’re OK and that we’ll get by just fine.

“She always worried about me and Darren so it would be great for her to see us happy with the winnings.” 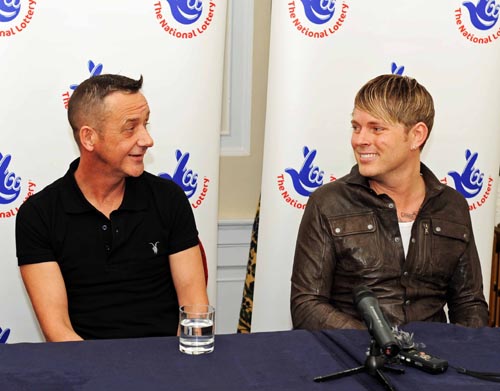 Graham, left, and Darren, right, chat about how they will spend their winnings

Despite his winnings, Graham said he would love to get back to work.

“If there’s anyone out there looking for a cleaner, I’d be happy to do it,” he said.

“I’m not looking for full-time work but I want to pay my part. The money is a huge help of course, but I have always enjoyed working and I want a job.”

Graham added: “Everyone in the community have been so supportive of us.

We’re a very tight-knit neighbourhood. We told our next-door neighbours about it first and they were delighted for us.

“We’ve lived in the area for years and we’re all very close. It’s the kind of place where everyone knows each other and they’ll pop in the back door with a cake or a pot of soup every now and then.”

He added that they have had no requests for help with their money so far. “Everyone is just happy for us. It’s not that kind of place. We haven’t had anyone coming up asking for their over-drafts to be paid or anything like that.” 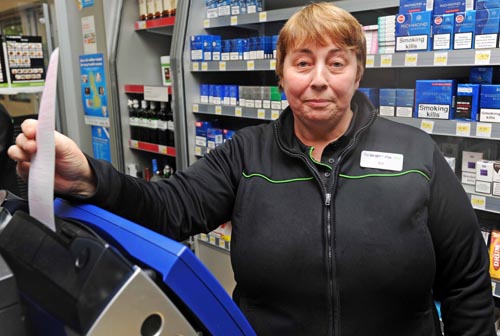 Ann Reilly sold the winning ticket to the couple

Though together long-term, the couple have no plans to enter a civil partnership or adopt children.

“We have no plans to have children either. I have two nieces who I absolutely love to bits. I think of them as my own, so we’re happy the way we are. We have two dogs and that’s enough for us.”

The happy couple said they will also donate some of their winnings to their favourite charities.

Graham said: “My mum used to go to a diving centre inEdinburghto help her with her MS. I know they’re short-funded so I’d like to help them out a bit.”

Darren added he plans to take on voluntary work with the SSPCA after he cuts down his hours in the bank after Christmas.

“I’m a real animal person and we have two rescue dogs so I’d like to do some work with the SSPCA or something similar.” 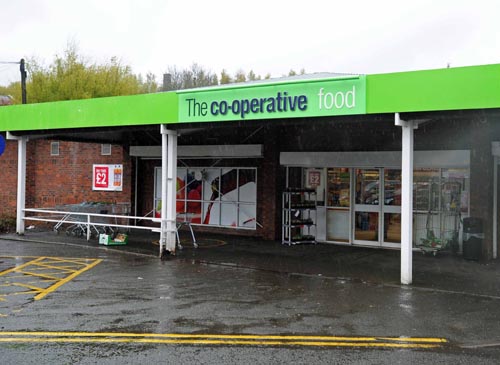 Edinburgh flat for sale with “panoramic” views of the city