The Scottish SPCA is appealing for information after two guinea pigs were found at a roadside in Cumbernauld.

A member of the public contacted Scotland’s animal welfare charity after spotting the frightened creatures on Seafar Road at the turn-off for McTaggart Road at around 11pm on Tuesday (8 May).

The adult males are now being cared for at the charity’s Lanarkshire Animal Rescue and Rehoming Centre at Bothwell, where they have been named Eamon and Damon. 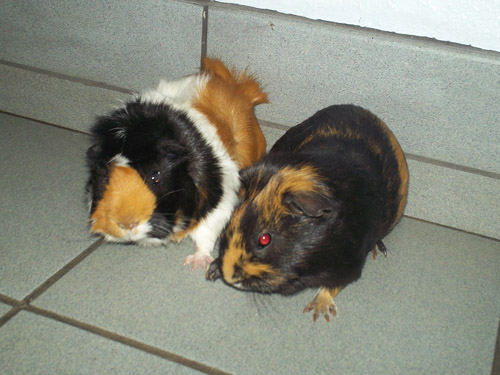 Animal Rescue Officer Jenny Hamilton said, “This was a very cruel act as Eamon and Damon could easily have made it on to the road and been killed.

“Whoever dumped these poor boys also couldn’t have known they would be found by someone who would help them.

“Thankfully, they are both in good health and we’ll soon be looking for new homes for Eamon and Damon where they will be treated with the care they deserve.”