A TEAM of Scots fire fighters battled for four hours to rescue a trapped pony – stuck up to its neck in mud.

The dramatic rescue operation yesterday saw fifteen fire fighters and vets use shovels to dig Dartmoor pony Lightning to safety after he fell in a hole.

The fire brigade worked with the SSPCA and local vets to free the pony and pull him out of sludge using a special harness. 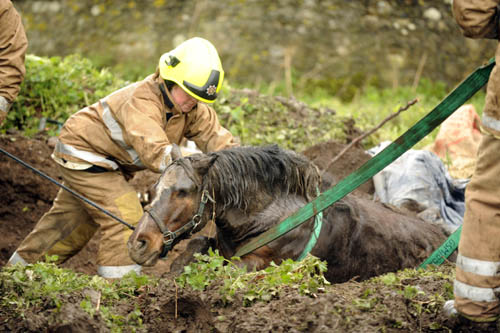 Lightning was unharmed during the rescue.

The rescuers were in a battle against time to rescue Lightning, who with each passing minute was at increased risk of developing hypothermia and suffering severe injuries.

Owner David Robinson, who says his ponies have kept him alive since being diagnosed with cancer, looked on anxiously as the rescue team raced against time to save his beloved pet. 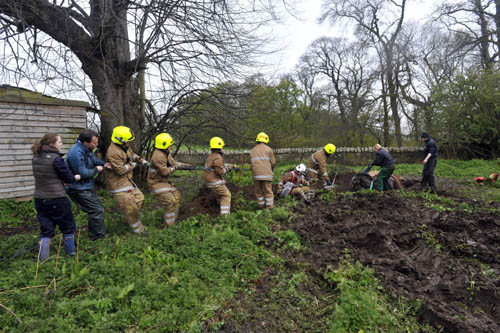 The remarkable rescue took place after the 64-year-old’s daughter discovered the stricken horse stuck in a hole at his enclosure at Pathhead field – near Edinburgh.

Mr Robinson, a retired long-distance lorry driver from Gorebridge, said he did not know how long the pony had been trapped, but rescuers said it could have been stuck overnight.

David said: “When I got there and saw him, all I could see was his nose poking out of the hole, it was just unreal.

“I just didn’t know who to ring – eventually I got in touch with the vet, then the fire fighters came and the SSPCA.” 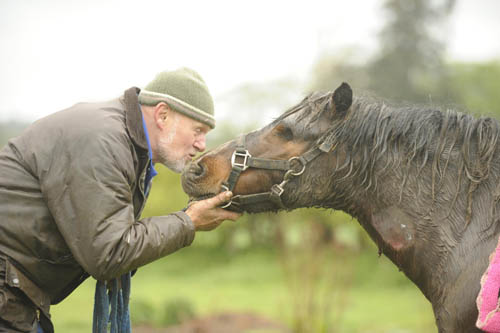 Mr Robinson give lightning a kiss after the rescue.

Rescuers feared the horse may suffer from hypothermia as he had spent so long in the cold.

Fire fighters excavated a hole before digging out ten-year-old Lightning using shovels. The 15-strong team, which also included local vets, pulled the horse to safety with a special harness during the nail-biting rescue mission.

There was a nervous wait to see if Lightning had been injured by his ordeal, but he is now back in the saddle after being checked over by vets.

David added: “I’m just so relieved to have him back. I just love my horses – I wouldn’t have wanted to lose them I’ve come very close.”

David credits his ponies with keeping him alive after he was diagnosed with bowel cancer. “Horses are the best therapy for cancer. They’ve kept me alive – I was given 18 months to live and that was five years ago,” he said. 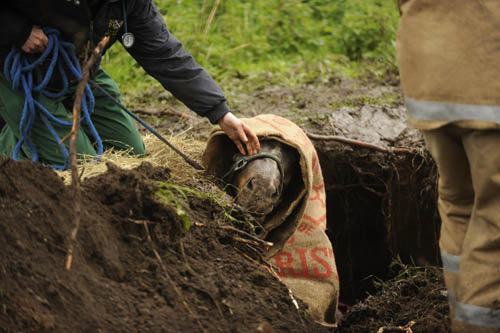 Only the nose of the horse could be seen.

Gemma Pearson, from the Dick Vet Equine Practice said: “The horse is absolutely fine. After we had pulled him out we got some fluids in to him and some painkillers. Luckily, this is not a common thing to happen to a pony.”

Gemma gave advice to owners who are in a similar situation. “The first thing you should do is ring a vet and the fire service – never try to pull the horse by yourself.”