A TEENAGE driver has been caught driving at an incredible 105mph on a B class road.

The 19-year-old was snared by Grampian police near Hopeman in Moray as part of a nationwide crackdown.

He was just one of seven teen drivers from the area who could have their licence taken away after being caught committing driving offences. 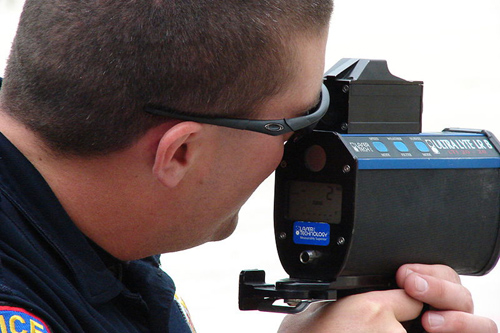 The 19-year-old has been reported to the Procurator Fiscal  Photo:David R. Tribble

In Aberdeenshire, two men aged 23 and 24, along with a 23 year woman have been reported for travelling at speeds between 88 and 118 on the A90 near Balmedie.

The force also dealt with two fatal road crashes over the weekend. While officers say there is no suggestion the drivers were guilty of dangerous driving they say it highlights the “vulnerability” of young drivers.

Chief Inspector Ian Wallace, Head of Road Policing at Grampian police, said: “In the past year or so, we have seen fewer people being killed on our local roads however last week’s tragedies has brought this issue sharply back to mind and has led to significant grief for the friends and families of those involved.

“Despite these recent sad events, the weekend period saw a number of young drivers failing to drive responsibility and through good fortune, the worst that befell them was being stopped by the police.  On another day, the circumstances could have ended up in something far more serious.”

He added: “This is a difficult message to have to provide following last week’s events, however the road safety message is one which continues to be vital if we are to make the roads as safe as possible.  The fact that some young people are committing serious road traffic offences is very disappointing and they need to know that we are out on patrol, every day of the week using marked and unmarked patrols, seeking out this type of driving behaviour.”

Across the country 787 drivers were caught speeding – including one 22-year-old who was driving at 92mph in a 60mph zone.

A 17-year-old from East Lothian was reported to the Procurator fiscal after he flipped his car. He had been speeding down a country road in wet conditions when his car “aquaplaned” and landed on its roof.
In the three day crackdown over 700 drivers and passengers were found to be driving whilst not wearing a seatbelt, including a passenger carrying a one year old child, unrestrained, on her lap.

Chief Superintendent Derek Robertson from Lothian and Borders Police who is the ACPOS lead on Casualty Reduction stated: “At the start of the campaign I stated that I find the number of people showing a blatant disregard for their safety and other road users safety, very worrying. My position has not changed and the figures from across the country clearly indicate that continued police activity is required to drive home the safety message.

“These statistics will refocus our efforts as we work to reduce injury and loss of life on our roads. This is unacceptable and it takes everyone to accept personal responsibility for their actions to deliver improvements in road safety for Scotland.

“There are still far too many road users speeding, not wearing seatbelts and not driving safely and we will continue to robustly police our roads to ensure the public are protected.