THE biggest archive of a fashion designer anywhere in the world will today add an iconic image stamp of Jean Muir’s design to its collection thanks to Royal Mail.

National Museums Scotland is home to the fashion designer’s archive, after it was gifted to National Museums by her widower, Harry Leuckert, in 2005. Jean, whose grandparents were Scottish, was a long-term supporter of the National Museum of Scotland.

The stamp featuring her iconic design will be added to the Jean Muir archive in Edinburgh for posterity as Royal Mail launched its new set of first-class stamps to mark the fabulous world of great British fashion designers. 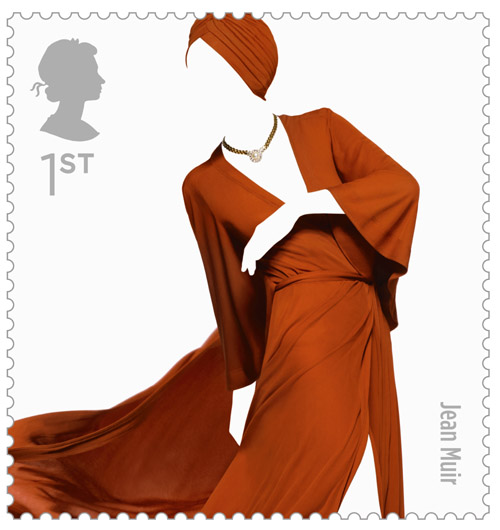 Jean Muir is one of the ten designers celebrated on the set of stamps featuring some of the most influential designers to have come out of the UK since World War II.

The designs of Paul Smith, Zandra Rhodes, Hardy Amies, Norman Hartnell, Ossie Clark, Tommy Nutter and Granny Takes a Trip make up the complete set of stamps which go on sale on May 15th.

Ian McKay, Director of Scottish Affairs at Royal Mail, said: “We are delighted to be presenting the iconic Jean Muir design stamp to National Museums Scotland. We believe it is right that this celebration of her designs and her powerful presence in British fashion is honoured and kept for posterity as part of her own archive,

“British fashion has grown to become a major national industry. It employs about a million people and contributes directly some £21 billion to the UK economy. So it is an honour to be able to pay homage to some of the designers who made the industry what it is today.”

Jane Carmichael, Director of Collections at National Museums Scotland, said: “We are delighted that the Royal Mail has chosen to honour Jean Muir in this way. Jean was an iconic figure in the world of design and it is only fitting that the Great British Fashion stamps should be launched here at the National Museum of Scotland where we hold her priceless fashion archive.”

Jean Muir was extremely proud of her heritage and was famed for her use of Scottish fabrics in her designs. She used Scottish craftspeople in her work throughout her career.

Muir had no formal fashion training, but learnt her trade on the shop floor and worked her way up through the industry.  When Muir’s widower Harry Leuckert donated the Jean Muir archive to National Museums Scotland in 2005, staff counted 18,000 items, making it the biggest archive of a fashion designer anywhere in the world.