A LEADING scholar whose biography of civil rights activist Malcolm X was posthumously awarded a Pulitzer Prize has been shortlisted for Britain’s oldest literary award, the James Tait Black Prizes.

American historian and critic Manning Marable, who died on April 1 last year, had worked on the book for more than a decade but did not live to see it published three days after his death.

Manning is one of four writers listed for the £10,000 best biography prize – one of two prizes awarded annually by the University of Edinburgh for books published during the previous year. 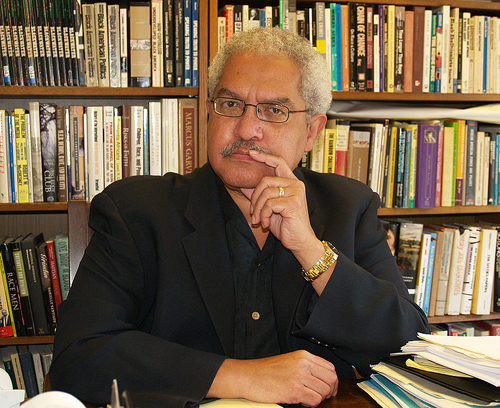 Manning Marable did not live to see his book published  Photo: David Shankbone

ManBooker Prize nominee AD Miller is one of four writers listed for the other prize, for best work of fiction, which also carries a £10,000 prize.

London-born Miller, a former journalist for The Economist is listed for his debut novel Snowdrops.

The three novels competing for the fiction prize are: Solace by Belinda McKeon, You and I by Padgett Powell and There But For The by Ali Smith, who is nominated here for the second time.

The shortlisted biographical works are: Ben Jonson: A Life by Ian Donaldson, The Last Pre-Raphaelite Edward Burne-Jones and the Victorian Imagination by Fiona MacCarthy, Malcolm X: A Life of Reinvention by Manning Marable and Nikolaus Pevsner: The Life by Susie Harries, which also won the 2011 Wolfson History Prize.

The James Tait Black Prizes are the only major British book awards judged by scholars and students of Literature.  Founded in 1919 by Janet Coats, the widow of publisher James Tait Black, the prizes commemorate her deceased husband’s love of good books.

Past winners read like a who’s who of the writing world, including D.H. Lawrence, E.M. Forster, Salman Rushdie, Zadie Smith, Cormac McCarthy and Ian McEwan.

Last year’s winners were Tatjana Soli for The Lotus Eaters and Hilary Spurling for Burying the Bones: Pearl Buck in China.

The winners will be announced as part of the Edinburgh International Book Festival on Saturday August 25.

The event will also see the announcement of ‘The Best of James Tait Black Prize’, a special award as part of the 250th English Literature anniversary at the University, celebrating the fiction winners from the past 93 years.

Deputy Director for University of Edinburgh’s Centre for the History of the Book Professor Jonathan Wild said the shortlist was as illustrious – and diverse – as previous years.  “As always we’re left with the unenviable task of trying to separate one fantastic work of literature from another.  The quality of works we considered this year was top notch, which made the shortlisting process even more difficult.”

“It promises to be a memorable year for the Prizes as we celebrate the 250th anniversary of English Literature at the University.”