THE majority of people in Scotland (86 per cent) believe that children should not be exposed to any tobacco marketing according to new data published by Cancer Research UK today (Monday).

Eight in ten people (80 per cent) surveyed across the country think that tobacco marketing is harmful to children. 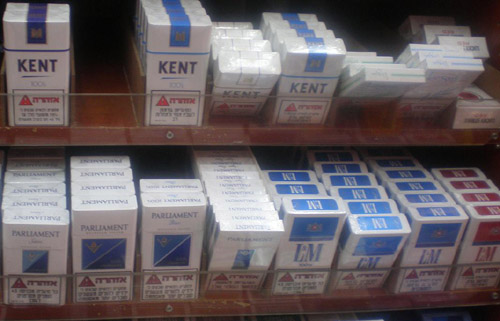 Scots say cigarette packaging is too appealing to children

Cancer Research UK has released the results as the UK government consults on whether to put all tobacco in packs of uniform size, shape and design, with large health warnings front and back.

The charity is championing the call to protect children from tobacco marketing through a hard-hitting campaign – The Answer is Plain.

People in Scotland are being urged to sign the campaign petition for all branding to be removed from tobacco packaging at www.theanswerisplain.org.

Other figures show 25 per cent of men and 24 per cent of women in Scotland smoke. Cancer Research UK believes that plain, unbranded packaging is needed to reduce the appeal of tobacco products to children and give the nation’s young people one less reason to start smoking.

Vicky Crichton, Cancer Research UK’s public affairs manager for Scotland, said: “This survey shows people across the country clearly support action to get rid of one of the last ways the tobacco industry can market its products. So we’re asking them to sign our petition and help end the ‘packet racket’.

“Many parents know their children are very attached to certain brands and cleverly designed packaging plays a significant role in maintaining that attraction. But when we are talking about tobacco then it’s time to change the law.

“We have a unique opportunity to protect children from the marketing of this deadly product. This is not about ‘the nanny state’. This is about us as a society saying that it is wrong for tobacco – a product that kills half of all its long term users – to be marketed to children as though it were a bag of sweets.”

When asked about how brand aware children are, a fifth (20 per cent) of parents and grandparents of children under the age of 18, in Scotland, said that they thought it was important to their oldest child or grandchild to have specific branded goods.

Fiona McCallum, 45, of Knightswood, Glasgow, is in no doubt that cigarettes are to blame for the lung cancer that killed her beloved mother Ruby just three months after it was diagnosed.

As a mum to Isobel, 14, and 17-year-old William, Fiona wants to do everything she can to protect children from the allure of glitzy tobacco packaging.

Fiona, who is running Cancer Research UK’s Race for Life event in Glasgow next month in memory of her mum, said: “I know that going through the trauma of seeing my mum die of lung cancer means that my children will never smoke but so many kids don’t think it can hurt them when they start smoking and are picking a fancy cigarette packet to put in their school bags.

“The array of different packaging young people are confronted with today is frightening, from limited editions, to patterned cigarettes and packs that look like they should contain perfume bottles.

“I fully support any measure that makes cigarettes less attractive to children. That’s why I’m urging everyone Scotland to sign Cancer Research UK’s petition and help stub out tobacco marketing to young people.

“My mum was a wonderful family person and it kills me that cigarettes killed her. If anyone could see how my mum suffered, they would never take up this terrible addiction. My mum’s decline was so rapid and seeing this determined, hard working, strong woman just fade away was heart breaking for us all.”

The children’s reactions to the packs include: “It makes you feel like you’re in a wonderland of happiness”, “The pictures actually look quite nice. Ice cubes and mint.”, “It reminds me of a Ferrari”, “Is that the Royal Sign?” and “Yeah. Pink, Pink, Pink”.

People in Scotland can sign Cancer Research UK’s ‘The Answer is Plain’ petition at www.theanswerisplain.org.