HEARTS fan Ian Downie was so proud of his ticket for the cup final – he decided to iron it.

But the 34-year-old’s attempt to have a perfect ticket for the game may end in disaster after he severely scorched the precious piece of paper.

Ian said: “I saw my mate’s ticket which looked fresh and brand new and thought ‘I’ll just spruce it up a little’. 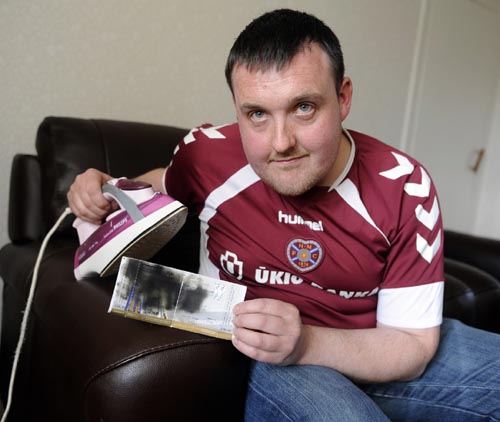 “I put it in a tea towel and ironed it, but I was in shock when I took it out.”

The image of the scorched ticket that was posted by Ian’s work colleague on a Hearts fan forum received responses of disbelief and amusement.

One post read: “I have had mine in my back pocket for nearly 2 weeks. I don’t want to put it somewhere safe as I did that with my passport and I still can’t find it. I think mine is going to get creased.”

Another post read: “I keep glancing up at the shelf just to make sure that all of our 7 tickets are still there.”

Nervous, the ticket had now become invalid, the Ian has made an appointment with the ticket manager at Hearts this week to find out if he is still able to attend the game.

The seat number and the reference number are still visible on the ticket and a user on the Hearts forum posted reassuringly: “As long as the bare code is okay…he should be fine.”

A customer service agent at the Scottish Football Association said Ian would be able to apply for a reprint if he still had the original.