MIGRANTS are working under threatening and inhumane conditions for little or no pay in parts of the UK food industry. This according to a report published today that was carried out by a team of researchers from Bristol, Hulland and Dundee.

A significant proportion of those interviewed had paid fees to agents to get to the UK and obtain work. Isolated, unaware of their rights and trapped in debt, researchers found cases of migrants being forced to share cramped accommodation (sometimes with strangers), subject to threats and racist bullying, and vulnerable to scams such as ‘under-work’ – the practice of recruiting too many workers and then giving them just enough work to meet their debt to the gangmaster. 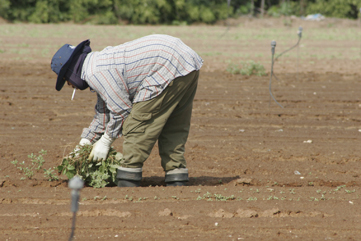 Migrant workers are being exploited in the UK, shows a new study

Productivity targets and workplace surveillance were found to be excessive; workers felt they were treated like machines rather than people and given targets that were often impossible to meet. Some workers were timed when taking toilet breaks and given impossible packing and picking targets to meet.

Sam Scott, one of the report’s authors, said: “Most of the migrants we spoke to in this research are in the UK legally, but their employment conditions are far from legal. Withholding payment, illegal deductions from wages and no proper breaks are all regular occurrences.”

The report recommends a number of changes to policy:

The full report contains in-depth interviews with 62 migrant workers; some extracts from the interviews about the conditions they experienced are below: “No, no, they never paid me the full … If I worked 40 hours, at the end of the month I did not get paid 40 hours … I would see maybe 20 hours, half of the hours that I worked for!”

“After all deductions, we received £30 per week. Some people were earning nothing at all. They even were getting in debt. Farmer was keeping all the money on his personal bank account. I was very worried about that fact. Yes, we received an envelope with a payslip, which stated weekly earnings, but farmer held all the money. If we needed cash, we had to ask farmer. He recorded it and took it off our next wage.”

“Let’s start, for example, from the physiological needs to use toilet. We could only go twice, or once for five minutes, in eight hours.”