Whilst meeting the veterans and their families at a reception held in their honour, Mr Brown thanked them on behalf of Scotland and presented a £5,000 donation for the proposed Arctic Convoy Museum on the banks of Loch Ewe. 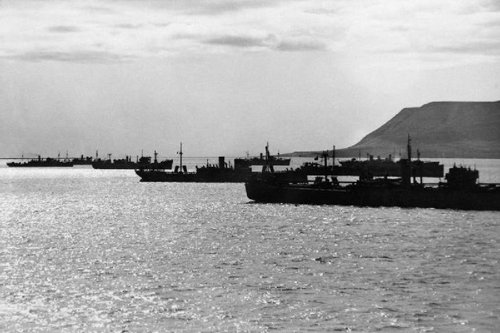 The Arctic Convoys travelled from Scotland to Russia during WWII

Mr Brown said: “It is such an honour and a pleasure to meet this group of men who made an immeasurable contribution to the Allied forces’ efforts during World War Two.

“Scotland owes these men a considerable debt of gratitude, and I thank them, on behalf of the whole country, for their bravery, determination and skill in navigating some of the world’s worst seas in the most hostile of conditions.

“I am delighted to see that efforts are continuing to be made to create an Arctic Convoy museum at Loch Ewe, from where so many of the convoys set off on their missions. I am pleased to announce that the Scottish Government is able to contribute £5,000 to the museum fund, which I hope, alongside other generous donations will help this project make real progress.

“I have written to MoD Ministers asking that the valour of Arctic Convoy veterans is recognised and acknowledged. I hope they listen and see fit to recommend to Her Majesty the Queen that a campaign medal is struck.

“Each year there are less and less of these veterans, I hope that the UK Government now listens and these brave men urgently get the recognition they deserve.”