A MAN who allowed his dog to suffer severely has been banned from keeping animals for ten years.

Steven Drewett, 65, of Logie Place, Aberdeen, was sentenced at the city’s sheriff court on Wednesday and fined £850. 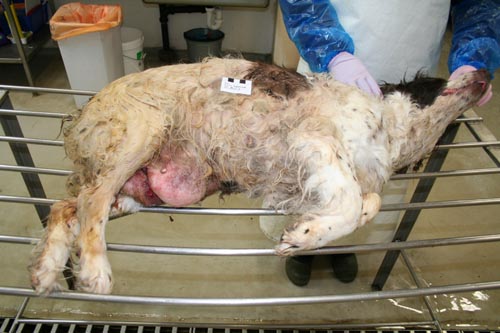 The vet decided to put the spaniel to sleep

A vet alerted Scotland’s animal welfare charity to Sheba’s terrible condition after Drewett took her to a local surgery believing she was about to give birth.

However, it was clear to the vet that Sheba was not pregnant but was suffering from mammary tumours which had become ulcerated.

She was unable to stand, was so weak she could barely lift her head and her legs were soaked with urine and liquid faeces.

Sadly, the vet’s decision was that Sheba was in such pain that the kindest decision was to put her to sleep and end any further suffering.

“This was a very serious case of neglect and by far one of the worst I have ever seen.

“The vet’s advice was that Sheba had not suddenly become ill and she experienced discomfort and pain for a period of weeks to months.

“Drewett allowed Sheba to suffer without seeking veterinary attention and demonstrated he is completely unfit to care for any animal.

“Pets rely on their owners entirely for their wellbeing and it is unacceptable for someone to ignore their animal while it suffers in silence.”