THE world record for the largest synchronised taekwondo routine was set today  in Glasgow, with a little help from Hollywood star Billy Boyd.

Staff from eleven of KPMG’s offices across the UK took a break from their usual duties and swapped office attire for t-shirts to take part in the routine as part of Barnardo’s “Big Blue Kick”, successfully raising £50,000 for the children’s charity.

Martial arts instructors Nikos Jakubiak & Angie Bailey led 30 KPMG staff and students from the Central Taekwondo Academy in Falkirk through the routine as Lord of the Rings actor, Billy Boyd joined to lend support to the world record effort. 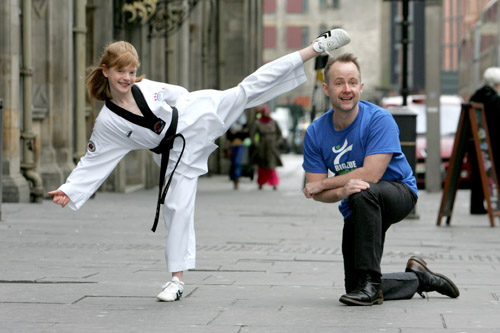 Billy Boyd said: “It’s been a privilege to be involved with today’s record breaking effort, everyone taking part has had a lot of fun raising money for such a worthwhile cause.”

“By setting this new world record, KPMG have helped raised awareness for Barnardo’s Scotland and the great work they do with young people across Scotland.”

Today’s event was the latest fundraising activity KPMG has held in aid of Barnardo’s, the firm’s staff-selected charity.  KPMG has already raised over £1 million throughout the UK for Barnardo’s in the first eighteen months of its two year fundraising commitment to the charity. KPMG is also a sponsor of the Great Britain Taekwondo team.

Craig Anderson, Senior Partner for KPMG in Scotland, said: “We had a fantastic response from staff keen to help set an impressive world record and raise money for an excellent cause.  As well as raising money for Barnardo’s Scotland, the Big Blue Kick enabled us to demonstrate our support for GB Taekwondo in what is a huge year for them. It’s a challenging sport, requiring a great deal of dedication and effort.

SallyAnn Kelly, Acting Director of Barnardo’s Scotland, said: “This is a great achievement by KPMG – the money raised will go towards helping the invaluable work we do with vulnerable children every day.”

“With so much focus on the Games this summer, it was great to be involved in an initiative that allowed so many people to access our sport for the first time and to set a World Record in the process. All this and the added benefit of valuable funds being raised for Barnardo’s. Congratulations to the staff of KPMG for their fantastic efforts and for their continued support of the GB team who I’m sure will be inspired by your success today.”