A DOG whose owner was jailed for his neglect has found a loving new home thanks to the Scottish SPCA.

Balto, an Alaskan malamute, arrived in the charity’s care last year after being rescued from his terrible living conditions.

His former owner was jailed for three months and banned from keeping dogs for three years following a Scottish SPCA investigation. 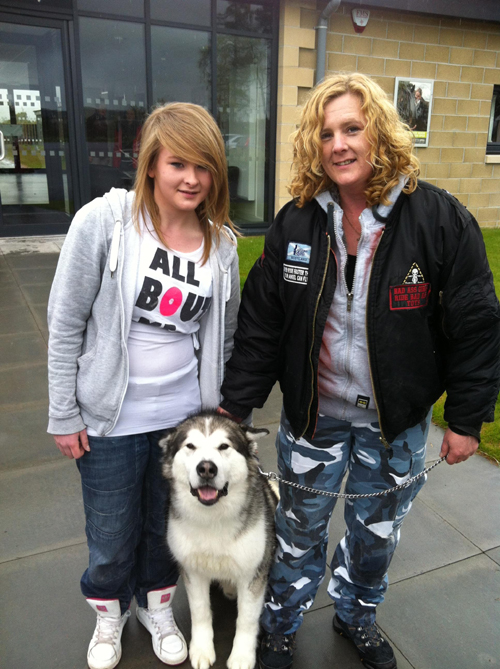 Bruce Sangster’s partner Gwenda and her daughter pictured with Balto

Staff at the charity’s Aberdeenshire Animal Rescue and Rehoming Centre appealed for someone to come forward and offer the eight year old a second chance after his tough past.

Bruce Sangster from Brechin was moved by Balto’s story and knew he could give him the care and safety he desperately needed. He said, “I just fell in love with Balto as soon as I met him.

“It’s very difficult to imagine how anyone could have treated him badly as he’s such a friendly and affectionate dog.

“The important thing is that he has a great life from now on and I’m really pleased I can be the person to give him that.”

The excited Balto left the centre at Drumoak to start his new life on Friday (18 May).

Centre assistant manager Debbie Innes said, “Balto is one of life’s real characters and I don’t think any of us will ever forget him.

“It’s absolutely amazing to see how happy he is with Bruce and we’re so glad he’s finally found someone to give him the care he’s missed out on.

“Balto is a fantastic dog and we have no doubt Bruce’s life is about to become one big adventure with him around.”

Anyone interested in offering an animal a new home can call the Scottish SPCA Animal Helpline on 03000 999 999.