CHILDREN are to get the rare opportunity to ‘putt’ themselves on the path to become the young Rory Mcllroy’s of the future at a special golf challenge on one of Scotland’s most historic courses.

The event, organised by the team behind the U.S. Kids Golf European Championships, offers the chance for kids new to the game and those who are developing their talent to test their skills on a ‘Nearest the Pin’ test.

The competition – which offers the chance of winning a series of exciting prizes, including a full set of U.S. Kids Golf golf clubs – is being held at Bruntsfield Short Hole Golf Course in Edinburgh, thought to be one of the earliest locations where golf was played in Scotland, on Monday May 21. 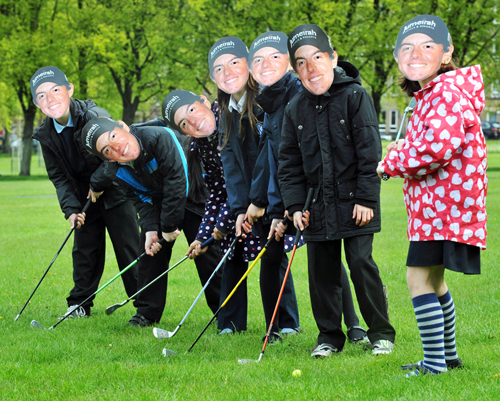 The U.S. Kids Golf European Championships is Europe’s premier junior tournament – and a record field of 500+ golfers from across the world are heading to East Lothian next month for the competition.

Tournament Co-ordinator Alasdair Good, who is also Head Professional at Gullane Golf Club, will be present on the day to provide training with all of the kids, giving them top tips on how to improve their game and ensure their swing will get them as close to the pin as possible.

Alasdair said: “The competition is a fantastic idea and a great way to get kids involved in the game of golf, whether they have experience or not.

“There’s a host of exclusive prizes which should get the children excited and create some lively competitive spirit – and the full set of golf clubs on offer will benefit any child looking to pursue an interest in the sport.

“For the majority of the children it will be a fun day out, but for some, who knows, it might spark their interest in the game and we could see them competing in next year’s European Championships or even be the rising golfing stars of tomorrow.”

Kids, aged 12 and under, will have two chances to try for the lucky shot at the Nearest the Pin competition which will run between 1-3pm.

Dan Van Horn, President and founder of U.S. Kids Golf, said: “Since our inaugural event in 2008, the European Championship has continued to grow in strength and is a main highlight of the junior golf calendar.”

The U.S. Kids Golf Foundation was launched in 2001 to provide opportunities for kids to play and learn the game through local tours and tournaments such as the European Championships. Since holding its first tournament in 2000, U.S. Kids Golf Foundation now runs some 6 00 events each year including the prestigious World Championships at Pinehurst.

The Foundation is the charitable branch of U.S. Kids Golf – the world’s largest producer of junior golf equipment. The firm has pioneered the development of golf clubs for young people, eliminating the problem of kids using heavier, cut-down adult clubs which often hurts developing swings and discourages budding players.

For more information or to register for the U.S. Kids Golf European Championships, visit www.uskidsgolf.com.