NICOLE Kidman made an impromptu visit to Edinburgh Zoo’s pandas – and no one noticed.

The Hollywood actress went to the visitor attraction with two of her children on Monday to see Chinese visitors Tian Tian and Yang Guang.

But she went unnoticed by other tourists who were intent on getting a glimpse of the black and white bears. 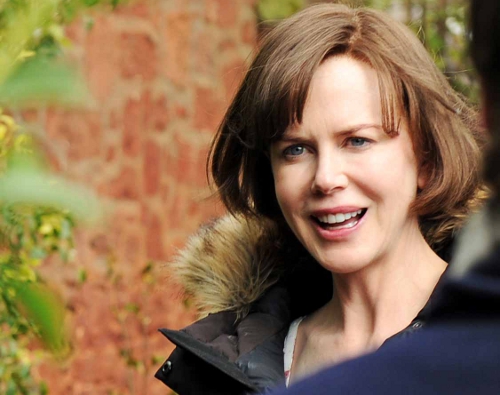 While staff recognised the flame-haired beauty as she made her way round the enclosure with daughters Sunday Rose and Faith, they did not draw attention to the fact the movie star was in their midst and let her enjoy her day.

A zoo insider said that the Australian actress had worn a hat and pulled her collar up to avoid being recognised.

Tony Bradford, 35, who is in charge of the panda visitor team, said: “She queued up like everybody else to see the pandas with her two children. She must have booked beforehand.

“One of my tour guides had her jaw on the floor, but she left her alone. We saw her but we just left her have a nice enjoyable day with her children.

“None of the people in her group noticed her, she kept herself to herself. If anyone did notice they didn’t let it be known.”

Ms Kidman, who is currently filming The Railway Man with Colin Firth, said little as she viewed the panda, which were having a snooze in their indoor enclosures, but did not continue with the group once the tour moved on.

Mr Bradford said: “The two pandas were both inside having a sleep. The group went to have a look at the outside part of the enclosure but she left the tour there as obviously the pandas weren’t there.”

He added that the novelty visit had left him stunned

He said: “I saw her when she was queuing. I was surprised, we knew she was filming in East Lothian but it was a normal Monday. We had schools, we had families, but to see an A-list celebrity standing in the queue was a bit of a shock.”

A spokeswoman for the zoo said: “We are really excited that she wanted to come here and bring her family on her day off to see the pandas and we are delighted that she came. Nicole and her family snuck in as regular visitors and, following their visit to see the pandas, enjoyed another couple of hours wandering around Edinburgh Zoo in the lovely sunshine.”