A FIFE woman has been banned from keeping animals for life after she admitted causing a pony unnecessary suffering, following a Scottish SPCA investigation.

She was fined £600 and disqualified from keeping animals. 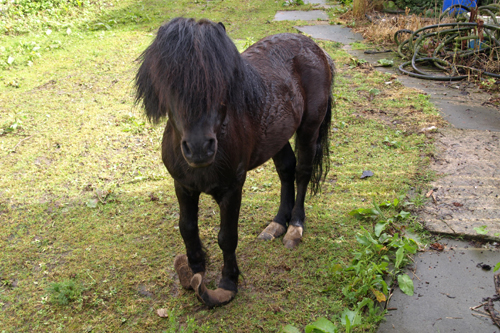 The pony had to be put down

However, the Sheriff made an exception to the ban to allow Balmain, who breeds and owns around 40 dogs, to keep dogs, up to a maximum of 40 at any one time.

Balmain failed to provide veterinary treatment for a 10 year old Shetland pony called Smudge, whose feet were so horrendously overgrown that he had developed a severe pedal bone rotation which was causing him extensive mobility problems.

The possibility of Smudge ever making a full recovery was nil, so the sad decision was taken by an equine vet to end his suffering and alleviate any further distress.

Scottish SPCA Chief Superintendent Mike Flynn said, “We welcome the life ban than has been imposed on Balmain for this offence.

“However, we are disappointed that the ban does not extend to all animals as, in our opinion, Balmain has demonstrated that she is unfit to keep any animal through her failure to provide any sort of veterinary treatment for the pony that suffered so tragically in her care.”